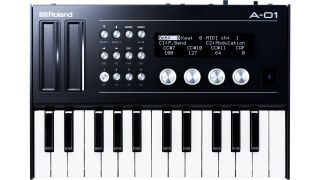 When it comes to equipping your studio, A MIDI interface is one of the least glamorous purchases you can make. So when Roland introduced the A-01 as an addition to its Boutique line of products, it came as a bit of a surprise. That is, until I read the specs.

In addition to an extensive array of MIDI functions, amenities such as CV/gate outputs and Bluetooth connectivity are dutifully checked off, but Roland didn’t just stop there. Instead, it threw in an adorable 8-bit synth and a handy step-sequencer to boot, then bundled it with the K-25M mini-keyboard dock, and actually made one of the dullest studio tools fun.

The A-01 module is housed in the same metal and plastic case as the rest of Roland Boutique series, so the whole package feels quite sturdy. The front panel features a big, easy-to-read LCD and an assortment of backlit knobs and buttons that make the unit look more complex than it actually is. I had the A-01 up and running with both the controller features and built-in 8-bit mono-synth without having to crack the manual until much later in the review process. The module also includes a pair of ribbon controllers that are capable of some nifty tricks, thanks to the A-01’s comprehensive MIDI implementation.

The back panel includes 5-pin MIDI I/O, 3.5mm CV and gate outputs, a micro USB port and a headphone output for the synth. Roland doesn’t include a micro USB cable with the synth, so make sure you have one handy when you unbox the unit. That said, batteries are included.

The A-01 is available both as a solo module and as the A-01K bundle, which includes Roland’s K-25M mini keyboard ($99 street on its own). The functionality is the same for both versions, so if you’re just planning to use the A-01 as a flexible interface for your DAW or as a DIN-based MIDI controller, the module is all you’ll need.

In addition to serving as a USB-to-DIN MIDI interface, the unit’s four backlit knobs and dual ribbon controllers can be assigned to any MIDI continuous controller (CC) number, as well as pitch bend, Channel Aftertouch and even Polyphonic Aftertouch, with selectable note number for the data. What’s more, there are four programmable SysEx slots that can be customized to send unique messages via the knobs and ribbons. That is, if you’re comfy with checksums and other MIDI minutiae, because the SysEx features are so deep that Roland includes a second, supplementary manual for them. There are also options for customizing the bank select MSB and LSB values, if you’re interfacing with a synth that goes beyond MIDI’s base 128 preset protocol.

For most users, the focus will be on using the knobs for standard applications, such as adjusting synth parameters. That’s why the dual ribbons are such a nice bonus, as their behavior can also be tailored in ways that allow you to use them as faders. By activating their Hold parameter, the value can remain at the point set when you lift your finger off the ribbon, rather than snapping back to the default position. You can also specify either ribbon to output MIDI note data to the internal synth or to outboard gear, with assignable key and scale for Theremin-like swoops.

As the iOS ecosystem explodes, Bluetooth MIDI has become an increasingly important feature for controllers. The A-01 supports the protocol and I had zero problems pairing it with my iPad Air: Everything worked beautifully.

The A-01’s CV and gate outputs adhere to the 1V/octave standard of most Eurorack modules (including Roland’s System 1m, System-500-series, and AIRA-series modules), which makes them suitable for interfacing with vintage synths or modular gear. The source for their output can be the keyboard, incoming MIDI data (with channel specification), the sequencer, or all three at the same time.

Roland included parameters for fine-tuning both the voltage and overall keyboard scaling, which is a handy when working with analog oscillators that go a tad sharp or flat at their extreme octave ranges. The A-01 worked like a charm on the synths I used for testing and even tamed an out-of-tune unit that had a tendency to go flat in its upper ranges.

The A-01’s 8-bit monosynth is a nice little bonus for fans of dirty digital sounds. It is a bare-bones affair, with a single oscillator that sports saw, square, PWM and noise options followed by a multi-mode resonant filter with lowpass, highpass and bandpass modes. As for modulation, there’s a single ADSR and LFO, assignable to pitch, cutoff, or pulse-width, which allows for the nifty trick of pulse-width modulation with random, square, or sawtooth waves.

Despite its simple set of parameters, the synth has a quirky, aggressive sound that is well suited to synth-pop and indie dance genres. It’s also handy for quickly ear-checking the tuning of any voltage-controlled synths you’re controlling with the A-01. Because the module doesn’t support audio over MIDI, its sound won’t show up inside your DAW as it does with the other Boutique modules.

I got so caught up in the A-01’s controller features that when I stumbled across its 16-step sequencer as I scrolled through its parameters, I must admit, I smiled. Its output can be assigned to the internal synth, external MIDI, or the CV/gate, which also allows the CV to control any parameter with a CV input, such as filter cutoff or synchronized oscillators.

Programming the sequencer was a bit fiddly, but that’s the case with nearly all step-sequencers that don’t include dedicated knobs for all events. However, once your sequence is programmed, the A-01 is capable of some nifty performance tricks, such as changing sequence step length, playing only odd or even steps, adding swing, and reversing or randomizing the sequence. Like the 8-bit synth, it is a terrific bonus.

The A-01 is like a Swiss Army Knife for modern studio rigs of all sizes. Its MIDI features are shockingly in-depth and, like Star Trek’s universal translator, it’s capable of interfacing with pretty much any type of synth, whether it’s a vintage Moog or an iPad Pro.

The 8-bit monosynth and step-sequencers are wonderful additions that make it loads of fun as a standalone unit. And when paired with the K-25m keyboard in the A-01K bundle, it is supremely portable too. If you’re looking for a synth interface that can tackle pretty much everything, this is the unit you’ve been waiting for.