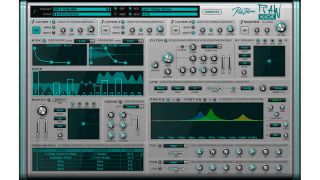 Rob Papen has revisited his Raw plugin synth and created a version that’s dedicated to the creation of kick drum sounds.

Raw-Kick enables you to build a kick out of three individual layers, each of which can operate in one of two modes. Specifically, you can use either a dedicated kick synth model or a sample-based layer. Creating kicks in this way is a tried and tested production technique; the theory here is that you can do it all in a single plugin rather than using multiple bits of software.

Each layer option offers a number of tweakable parameters. The Kick model enables you to control the harmonics, for example, and there are a range of distortion effects. The sample option, meanwhile, comes with a multimode analogue filter, two EQ sections and multiple FX algorithms.

You can polish your kick in the Master section, which includes a double EQ and effects. Presets come courtesy of several hardcore, hardstyle and DnB producers, including DJ Promo, Caine, DJ Mad Dog, Ophidian, Sinister Souls, Tha Playah, The Outside Agency and Wavolizer.

Raw-Kick is available now for PC and Mac in VST/AU/AAX formats. It costs $79/€79, and you can also download a demo from the Rob Papen website.

The plugin is also included in Rob Papen’s new Explorer-5 bundle, which now includes 20 of his products. As well as Raw-Kick, the Go2 synth and MasterMagic plugin have been added, too. Explorer-5 costs $499/€499.