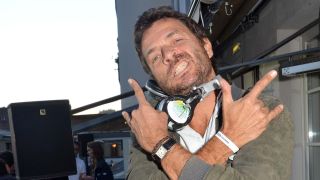 DJ and producer Philippe Zdar, known for his work as one half of French house outfit Cassius, and production work with a glittering array of big-name acts, has died following an accidental fall from a Paris building, his agent has confirmed this morning.

"He made an accidental fall, through the window of a high floor of a Parisian building," said Sebastien Farran, without giving further details.

As Cassius, Philippe Zdar and Hubert Blanc-Francard, aka Boom Bass, helped usher in a decade of Franco-funk breaks and filtered disco house to the global dance music scene. Along with outfits such as Bob Sinclar, Daft Punk and Stardust, they played a part in reinvigorating the stale script that '90s electronic music producers were reading from.

Bored with a straight-up four-to-the-floor approach to beatmaking, they dug deep into their collective influences of hip-hop, Detroit techno, Minneapolis funk, NY electro and disco, and stuffed the lot into their restless samplers.

But it's easy to forget that, prior to Cassius's seminal album, 1999,  Zdar also worked with Etienne de Crécy in the project Motorbass, as well as producing hip-hop as La Funk Mob with Cassius cohort, Boom Bass.

Zdar went on to build a brilliant career as a solo producer, working with acts as diverse as Beastie Boys, Phoenix and Cat Power.

The shocking news is all the more tragic given that Zdar was genuinely at the peak of his powers; Cassius’s latest album, Dreems, is set for release this Friday. Zdar also produced Hot Chip’s latest album, A Bath Full of Ecstasy, also out Friday.

Stars from the world of electronic music have reacted with shock and sadness to news of Zdar's death. You can read a selection of their tributes below.

Awful news about Phillipe Zdar, what an unbelievably lovely man with an incredible legacy. I was mesmerized by this record as a 15 year old https://t.co/H79OZ19NxqJune 20, 2019

Sad awakening here :( I just heard Philippe Zdar from @CASSIUSOFFICIAL passed away. I can’t stop remembering amazing parties we had all together. All my loving to your family, BoomBass and Pedro. RIPdg pic.twitter.com/XJwSOmdtSvJune 20, 2019

So fucking sad to learn about Philippe Zdar last night. A true, true legend whose influence hangs over not just dance but indie, hip hop, all of it. I remember buying Feeling For You when it first came out and being blown away... My condolences to his family and friends 💔💔💔June 20, 2019

He mixed Needy Girl & Rage for the Euro release of our 1st album. Then he mixed the entire Fancy Footwork album. Then Business Casual. He played a huge role in developing our sound. We’re devastated. RIP Philippe Zdar of Cassius, Motorbass & La Funk Mob, a true musical genius. pic.twitter.com/Y7pNmzREytJune 20, 2019

Woke up to the sad news, that Philippe Zdar has passed away. He has always been such a big inspiration to me, as part of Cassius but also as a mixing engineer. The world lost one of the most talented, humble and kind musicians last night. My thoughts go out to his loved ones. 💜 pic.twitter.com/9eNqShvDKqJune 20, 2019

RIP Philippe Zdar. Thank you for touching us and many many other people with your amazing music. 🙏🏼June 20, 2019

I just spoke 2u bro, u was so kind to agree to have convo with me for FOFRADIO sigh I’m really gonna miss you.. love you brotha Rest in Power Philippe Zdar ❤️🙏🏾⚡️June 20, 2019

Can’t comprehend the news about Philippe Zdar. An absolute musical genius and one of the nicest chaps you could meet. Such a sad day.June 20, 2019

@CASSIUSOFFICIAL God damned... rest in peace Philippe this is so sick.We met twice, first time at Daft Traxx back in the glorious days, i do remember your great sense of humour ... https://t.co/I9A20ETG3DJune 20, 2019