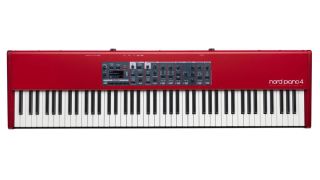 The Nord Piano 4 is a premium offering in the realm of piano-centric keyboards, aiming for hyperrealistic touch and expressive piano emulations. This fourth-generation model builds on the best features of its predecessors, adding expanded polyphony, smoother patch transitions, a new filter bank, and enhanced splitting features.

Nord keyboards are often lauded for their impeccable design standards, and the Piano 4 is no exception. It’s a tad heavy, but the Piano 4’s weight is justified by the quality of its build. Each element of the instrument is thoughtfully and sturdily constructed, from the input jacks to the control pedals. It's a sleek design that attains equally strong aesthetic and functional value.

The back panel of the Piano 4 opts for all the essentials: a stereo headphone output, individual 1/4” left and right jacks, an auxiliary monitor in jack, 5-pin and USB MIDI jacks, and sustain and control pedal inputs.

The sustain jack supports Nord’s included triple pedal set, which blew me away with its dynamic response. The damper’s strength and mechanical noise levels are precisely controlled by pedal pressure, lending additional depth in performance and practice. When combined with the Piano 4’s “soft release” mode, the sustain damper helps soften and expand legato passages.

No surprises here: the Piano 4’s control components are nearly identical to those of its predecessors, and other Nord models like the Stage and Electro. There’s little room for improvement in this intuitive layout that’s already well-suited for live, studio, and home use. That said, the Piano 4 has upped its patch organization game, facilitating set building with new copy/paste/move functionalities and page/list patch views.

To add yet another layer of depth, Nord has designed a new set of Creative Piano Filters to help sculpt its patches to the user’s playing style. Filter options for muted softness, midrange push, and high-end brilliance offer ample versatility when used in conjunction with Nord’s built-in adjustable velocity curves. Coupled with 120-voice polyphony and true-to-life reproductions of string resonance, the Piano 4 is quite a force.

True to its name, the Nord Piano 4 has a sizable bank of high-quality piano patches. Lush grand pianos, quirky upright pianos, retro CP70 and DX7 patches, and Nord’s famed electric piano emulations are swiftly accessible from the onboard program menu. The digital and electric pianos are quite similar to those found on other Nord models, but I was especially impressed by the upright pianos, which exhibit an abundance of imperfectly charming character.

The bulk of Nord’s attention clearly went into the Piano 4’s 1GB piano sample pack, but the 512MB sample synth library has a multitude of solid additional options for layers and splits. Some patches (keyboard instruments, basses, mellotron) expectedly sound better than others (brass, strings, guitars). All in all, however, the selection is extensive enough to accommodate most patch needs, both on and off the stage.

Limitations
The premium cost will price out some intermediate and beginner keyboardists, but you get what you pay for: this is a top-of-the-line keyboard, no holds barred. Device weight, not to be confused with keybed weight, is slightly heavier than expected.