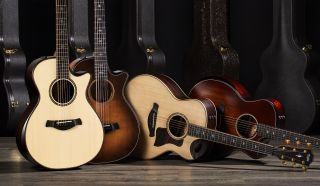 NAMM 2020: Every year Taylor give us more reasons to part with our cash for a dream acoustic, and this looks like it's going to be a vintage one from the Californians with four new Builder's Editions for the well-heeled, but plenty more for players who can't stretch their budgets that far – including new Koa GS Mini guitars and basses, plus 200 Series and V-Class additions.

Before we get to the sumptuous Builder's Edition models, this one caught our eye immediately – yes that is a second soundhole. What's going on? Taylor's Master Guitar Designer and Ownership Partner Andy Powers is the man who knows the answer…

“By adding a second aperture that’s a different size than the first one, the resonant frequency of the air inside the body gets altered in significant ways, broadening the response,” explains Powers.

The guitar is a a shorter scale length (24-7/8”)  and the features combine for 'a high-fidelity, symphonic sound that radiates more evenly in different directions, creates a more immersive, reverb-like effect with remarkable sustain.'

Taylor’s biggest, deepest body shape, the Grand Orchestra has now got the V-Class treatment. Powers has embraced the Orchestra's deep voice and enhanced its sustain and intonation. Players down tuning will especially appreciated the V-Class difference here.

Both the 618e and 818e share new appointment details, including a new Mission fretboard/peghead inlay in mother-of-pearl and ivoroid.

The 200 series has updated the 200 Series and added new 200 Plus models this year. Most of the models in the series feature layered Indian rosewood back and sides and a solid Sitka spruce top.

They're available in a Dreadnought and three Grand Auditorium models, including 12-string and nylon-string options — 210ce, 214ce (pictured above), 214ce-N (nylon-string) and 254ce (12-string).

The series also includes the 214ce-K, featuring layered koa and solid spruce and the new 200 Plus Series debuts with one Dreadnought (210ce Plus) and one Grand Auditorium (214ce Plus, pictured).

Taylor have always made great gigbags for securing your nearest and dearest and each 200 Series model comes with Taylor's new water repellent AeroCase that's 1/3 lighter than Taylor's hardshell case with one-third less weight.

We love our little mahogany GS -Mini enough that we've gigged, recorded and travelled with it, while making it a constant companion for playing at home. These new models sweeten the deal even further.

The GS Mini-e Rosewood features layered Indian rosewood back and sides and with a solid Sitka spruce top. It also comes with a structured GS Mini hard bag.

The new GS Mini-e Koa Plus has layered Hawaiian koa back and sides and a solid koa top. The model's upgraded appointments include a shaded edgeburst body, Taylor nickel tuners, ES2 electronics and the new Taylor AeroCase.

The GS Mini-e Koa Bass is the second GS Mini Bass model and features layered Hawaiian koa back and sides and a solid koa top.

Taylor's other popular travel-size acoustics are also getting some TLC with an upgrade. The spruce-top BT1 and electro BT1e with ES-B electronics now feature layered walnut back and sides with a maple neck.

There's a Builder's Edition 324ce that promotes sustainability back and sides of Urban Ash sourced from trees that required removal from urban areas in Southern California due to safety issues and other factors.

Taylor says that Urban Ash has a sonic character similar to Honduran mahogany.

As well as the contouring and bevelled armrest Builder's Edition fans will be familiar with, the 324ce premium features include a Curve Wing bridge, Gotoh tuners, and a Dark Roast stain and edgeburst with Silent Satin finish.

Both guitars are designed as a high-end acoustic for electric players. The Indian rosewood/Lutz spruce Builder’s Edition 912ce is a compact Grand Concert that features a beveled armrest and cutaway, chamfered body and fretboard edges, and 24-7/8-inch scale length.

The guitar is reverse-strung to emphasize the fundamental note, and Taylor claims this creates a 'slightly fuller, meatier 12-string sound'.

Premium details include a Curve Wing bridge, Gotoh tuners, and Silent Satin finish with a Wild Honey Burst around the body and neck (an optional natural top is also available).