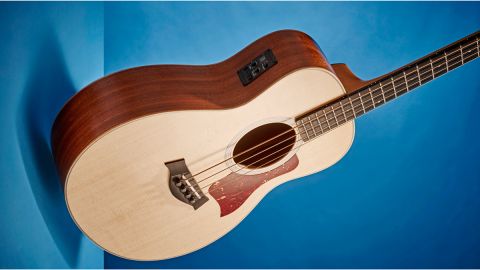 A fantastically portable and usable bass.

Taylor, the venerable American luthier, had 314 models of acoustic guitar on sale last time we checked its website, so it’s clearly not afraid of trying out instruments with eccentric - or at least widely varied spec.

The existing GS Mini guitar range is popular among professional musicians looking for a second or travel instrument, and indeed for beginners of all ages, so it’s logical that a bass version has now been produced too.

Note that you can buy three-quarter or half-sized acoustic basses for much less than the £827 that Taylor is asking for the GS. The universal problem with those instruments, made by manufacturers that we won’t name because we’re such consummate professionals, is that the body and neck may function but the tuners and bridge will definitely work badly or inconsistently, sooner or later. The tension of big old bass strings is just too much for cheap parts to handle.

Now, Taylor has explained in the accompanying press release for the GS Mini bass that a hell of a lot of research and development has gone into this instrument, for those very reasons. It even makes it clear why a whole new bridge pin had to be devised - it’s because a thick string doesn’t like bending as much as a thin one, so you have problems with the saddle angle, and therefore you need to spend time and money on a solution.

So now you know why you’re spending the thick end of a grand on this little bass. We’re glad we got that out of the way, because big sums of money applied to small instruments make us wince every time. Of course, you’re also paying for the US build, although in the age of excellent production quality in Indonesia, China, India and Mexico, do end-users really care any more?

Pick up and play the GS before you plug in and you’ll be gratified by this instrument’s enjoyable playability. The string tension is fairly low, allowing you to bend the D and G at the top of those scale runs to your heart’s content.

There’s no thumb rest, as per every single acoustic bass we’ve ever seen - this will be the first major societal change we make after the revolution. Make do with a pick or the old ‘rest your thumb on the E string’ solution, however, and you’ll probably be fine.

Note that the custom nylon-core strings, made by D’Addario with phosphor bronze wrap wire, are the only strings that will work on the GS Mini for the reasons explored above - so if you prefer any brand or type, too bad. For the record, we found the strings very playable, although we didn’t break or change any of them during our review - so we would be interested to hear from any users if the process is easy or otherwise.

Also as per acoustic tradition, you have 14 accessible frets of a total of 20, permitting a decent set of note choices in the midrange as well as low down: high-register shredders will be out of luck, but why would you be playing a GS Mini in the first place if that was your chosen style? With that said, the low string tension permits a comfortable slap-bass style that full-size acoustic basses tend not to allow - although be careful with those pops, or said low tension may lead to you breaking a string, or worse.

So, let’s head ampwards and plug in via the rear strap button - there’s also a front button, which won’t sound like a big deal unless you’ve spent 10 years reviewing basses on your lap. The bass is light at only a couple of kilos, meaning that it balances well at more or less any strap height. If you’re planning to wear it down by your knees in a death metal band while headbanging at 300BPM, please do so, but make sure you send us pictures.

The tone range now emanating from your cab is eminently usable. There’s a surprising amount of top-end edge and grit for an acoustic, so by all means use that to cut through all those pesky guitars. Mids are strong too, making up a husky, ballsy, honky tone - sorry about all the technical terms. The only sacrifice to the small body and scale length is the low end, predictably. You won’t be playing this bass in a reggae or dubstep band, for sure, unless you boost your bottom end with a preamp pedal or other suitable gizmo.

We have a 23.5” scale length here, 10 inches shorter than average full-size bass guitar scale. What does this mean in practice? Well, for starters your hands move shorter distances, which is fine if you’re banging out quarter-notes in a country band, but jazz fusion shredders looking to deliver lightning-fast runs had better be nimble-fingered. Slides need to be executed carefully; tapping is doable, but tricky; and the bass doesn’t ‘fight back’ when you hit it hard, as it doesn’t have the necessary mass. Treat this instrument with care, in other words.

We were impressed with the electronics, as much for their design as for their function. There’s only a two-band EQ here, but frankly that suffices: there’s enough top end for anything except the glassiest tone, and the bottom end boost is essential.

Natural mids are taken care of, as we said above: if you need a deeply scooped tone, look elsewhere. The tuner works fine and the removable two-button-battery compartment is an absolute thing of beauty, if also absolutely tiny. Drop it down the back of your amp, and you can forget plugging this instrument in henceforth.

To sum up, we think you’re going to have some good times with this instrument. Sure, it’s expensive, but you’re paying for the heritage name on the headstock as well as the sapele/spruce body and neck woods. Our review model’s tuning heads were just the tiniest bit stiff, but then again, it had been flown across the Atlantic in a cargo hold to reach us: a bit of TLC and a room-temperature environment and we’re sure they would have smoothed out.

The backpack-style bag that accompanies the GS Mini is welcome, at least partly because this bass is not particularly robust. When (not if) your drummer gets drunk and steps on it, it’s bye-bye Taylor and bye-bye your eight hundred quid. Get a hard case, but in the meantime, the gigbag will keep it out of harm’s way.