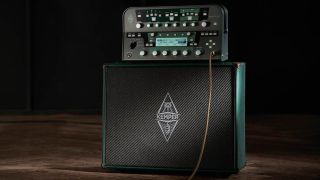 In the immortal words of the band Staind; it's been a while. Kemper first announced its Kabinet and Kone replacement to much excitement back at Winter NAMM in January 2019, but we're very happy to say it's finally available to buy. And if you own a Kemper you've probably got a 'take my money' expression on your face about now because the Kabinet looks very impressive.

The German company is calling it the ultimate cabinet solution for Kemper PowerRack and PowerHead profilers (the Rack, Head, and Stage models will require a power amp to be used with the Kabinet). Following the Line 6 approach with the Powercab of modelling speakers rather than cabs themselves, the Kabinet and Kone  have 19 classic speaker imprints to choose from.

The 8.6 lb Kabinet combines the new Kone loudspeaker Kemper's exclusive speaker tone mining technology. The Kone itself is a 12“ full-range speaker designed in cooperation with Celestion and driven by the Profiler's DSP for a full-range frequency response, using Kemper's dedicated DSP algorithm.

However, as opposed to full-range PS and monitor speakers, the Kone has been designed so even this full-range sound has guitar speaker character. Kemper offers further control over this elements with its Sweetening and Directivity controls.

The 19 included speaker imprints offer a range of Celestion classics alongside other brands and even rare models. More will be added with future updates too.

If you don't have the cash to but the full Kabinet or have a cab you'd like to use, the Kemper Kone also available as a replacement speaker in a single unit or two and four speaker sets for 2 x 12“ or 4 x 12“ guitar cabinets.