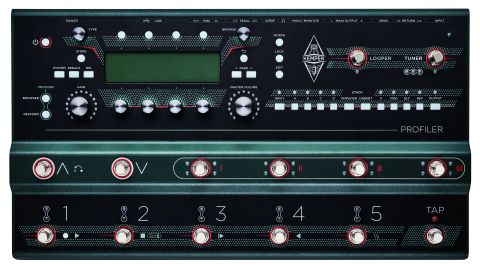 Despite a couple of niggles, the Kemper Stage is an awesome all-in-one floorboard that we’d happily recommend as the core of any digital rig.

The long-awaited floorboard version of Kemper’s acclaimed Profiler, the Stage essentially combines the company’s big daddy Profiler head and rack unit technology with its Profiler Remote. A two in one solution, you could say.

Christoph Kemper on the future of the amp stack
"Not too many players can get away with just that one amp tone any more."

The combination allows the Profiler Stage users to access and edit amp profiles as well as a wide range of onboard effects. Players can then switch between editable rigs on the fly during performances if they desire.

Kemper’s amp profiling technology allows players to capture the sound of their own amplifiers (or other people's) digitally as well as accessing hundreds of existing profiles via Kemper’s onboard and downloadable software.

You can quickly access those models or go deeper into editing parameters on the Stage if you want, and each profile captures the nuance and response of amp, speaker and mic placement in a user-accessible preset.

When Kemper first unveiled its profiling amp in 2011 it represented a landmark for the industry. The brainchild of German synthesizer designer Christophe Kemper, it changed the way tube amplification could be captured by users digitally. And resulted in a recreation that is deemed close enough to the real thing to now be adopted into the backline of vintage tonehounds as respected as Mark Knopfler.

Until now it’s only been available in rack and head forms with a separate floorboard to control it. This combines the functionality of the profiler and remote for less than the price of the head or rack alone. So the Stage represents the all-in-one Kemper solution players have requested for years. So is it worth the wait?

Kemper Profilers offer a USP that will be worth the asking price with the accessibility of floorboard functionality for some players alone – that ability to profile your own amps. Unlike the most expensive Powerhead and Powerrack versions of Kemper’s Profiler, the Stage unsurprisingly doesn’t offer an inbuilt Class-D power amp due to its form factor. But it’s got everything the standard rack and head offer.

The Stage can copy, ie, ‘profile’ your amp’s sound, allowing you to play through a digital version of your amp’s exact signature tone. It’s a profile of your own amp set up in its sweet spot just as you like it.

The detail captured has been enough to convince many pros to convert to Kemper for accurately capturing their studio tones onstage, especially for fly-in gigs when they need to travel light and without costly, sometimes fragile vintage amps.

In addition to the ability to profile your own and others' amps yourself via mic’ing, you get access to hundreds of online profiled amps from the free Rig Manager desktop app for Mac and PC, and this will also add the much-requested user editing via computer with a forthcoming 3.0 update (release TBC).

Like its predecessors, the comprehensive choice and tonal quality on offer from the Stage arguably surpasses any other unit available right now. Including the amp modelling of Line 6’s Helix and up there with Fractal Audio’s Axe-Fx III more expensive rack unit (though a scaled-down pedal version is coming from Fractal).

Coupled with a full range of high-quality editable effects (including drives, distortions, a looper and modulations) and future firmware support to update these, the Kemper could be all the rig you ever need.

In use, the Stage's footswitches are clearly defined in use, so you won’t need much guesswork. They indicate bank shift, effect on/off and patch select, while the Type, Browse and Browser serve as your access points to start editing.

For the stage use it largely lends itself so well to with a clear layout and tank-like build quality, the Kemper does have two drawbacks for us but they may not be dealbreakers for players.

Firstly, even with its decent contrast, we think the display screen is simply too small in 2019. The Stage is hardly diminutive compared to other floorboards on the market, and the likes of Line 6 and HeadRush have moved things on, offering more intuitive UIs and, in the latter’s case, touchscreen control. With the highly editable nature of the Kemper’s parameters that makes it a tweaker’s dream, there isn’t much space to work with on that display.

We’d also have liked to have seen an expression pedal built-in. Launching into a market with expression-equipped Line 6 Helix Floor and HeadRush Pedalboard, the omission seems stranger and a separate third party pedal would need to be purchased. But these feel like small gripes compared to the tonal arsenal you’re gaining here in quality and quantity, plus the additional built-in advantage over the rack and head units with kicking in effects and the built-in looper.

Like its predecessors, we love this Kemper’s tonal quality and the Stage offers the class-leading sounds we’d expect. Alongside the user-profiling capability and vast array of online profiles on offer, the Kemper Stage proves to be worth the investment for players who want access to a wealth of great and versatile guitar sounds. It’s also the most affordable entry point to the world of Kemper profiling yet and the company's most gig-friendly option.

MusicRadar verdict: Despite those screen reservations and the lack of an onboard expression pedal, the Kemper Stage is an awesome all-in-one floorboard that we’d happily recommend as the core of any digital rig.