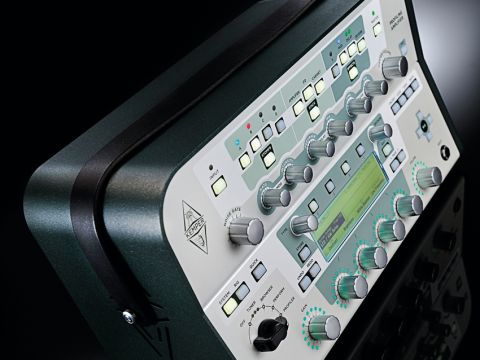 A product that finally delivers on the promise of digital modelling. A truly revolutionary piece of kit for serious recording guitarists and producers.

We first heard about the Kemper Profiling Amp in January 2011 in the run up to the Winter NAMM show.

While it promised to be a genuine game-changer in the decades-long quest to synthesise the sound
of the valve guitar amplifier, we must admit to regarding it with a degree of cynicism.

"It proves possible to create amp profiles that are good enough to fool three sets of very experienced ears during our testing process."

On the NAMM show floor - amid a sonic tempest of multi-directional shredding and bass guitars with inordinate numbers of strings - it was difficult to tell if the KPA was anything more than another digital modelling 'solution' destined for white elephant status. The Johnson J-Station, anyone?

Yet fast-forward to 2012, and not only are we holding a Kemper Profiling Amp in our hands, but there is the unmistakable sound of a buzz building in certain circles.

It's clearly time to fire this thing up and investigate, but for those to whom the KPA is still mysterious, let us pause to examine the concept. Since the SansAmp arrived in 1989, amp modelling, first analogue then later digital, has sold the promise of access to a library of guitar sounds at a much lower cost and with considerably greater convenience than buying the 'real thing'.

Increasingly, software modellers such as IK Multimedia's AmpliTube and Native Instruments' Guitar Rig enable the more technologically savvy of us to create customised guitar sounds using emulated amplifier, effects, speaker and microphone combinations that would be way beyond either our budgets or the realms of practicality in the old-fashioned, analogue domain of hot glass and moving air.

That's all well and good, but we guitarists are pugilists at heart. From the bloodied knuckles and glorious noise of performance, the best of us make something like art. Our culture is bound up in ritual, superstition and myth - and we like it that way. We know great tone and it sure as hell doesn't come from ones and zeroes.

But what if there was a digital modelling amplifier that could turn the tables? Rather than saying, for example, "our engineers analysed a JTM45 and based on their results, here's our British Blues preset, now deal with it," the exciting thing about the Kemper is that you can use it to capture the sound of your JTM45, right where it hits that sweet spot, with the microphone you prefer and that mic preamp that just adds a certain something.

Then you can refine the 'profile' you've made while A/B-ing the digital signal with the original using the Kemper's onboard EQ, and save the sound alongside the library of 200 or so profiles that comes pre-loaded, with access to hundreds more via the Rig Exchange section of the Kemper website.

If you fancy a little more spice you can clean up or crank the KPA's onboard gain control to go way beyond the level of drive available on your original amp, adjust sag, tweak the audible effects of pick attack and even, thanks to what Kemper claims is "digital alchemy", alter the size of your virtual cabinet from a huge stack right down to a cigarette packet.

There's also a fully loaded set of effects and, once you are happy with your sound, you can grab the (hungry man's) lunchbox-sized KPA and jet off to a studio or gig halfway around the world with your signature sound in your carry-on luggage. It has to be too good to be true, doesn't it?

Although the Kemper is capable of profiling your whole signal path including mic preamps, channel strips and a blend of more than one microphone if that's your preference, the simplest way to set it up and start making a profile is to first plug into your amp of choice as you normally would and dial in a sound that you are happy with.

Once you've done that, plug your guitar into the KPA's instrument input, and then connect your regular amplifier's input to the KPA's direct out/send and your mic of choice to its return jack. Then connect the KPA's master outputs to your mixer or powered speakers to monitor your signal.

Next, Kemper advises that its best to browse through the pre-loaded profiles on board the KPA for one that's similar to the amp you intend to profile, switch back and forth between this and the incoming signal from your amp and tweak the input gain until they are roughly equal in level. Select whether you are profiling a clean or distorted sound so that the KPA compensates, then hit 'start profiling'.

This is the moment when everything goes a bit Twilight Zone as the Kemper sends genuinely unsettling white noise through your amplifier and you either laugh or cry, depending on your disposition. The product manual explains what these sounds are doing in greater detail, but suffice to say the KPA is collecting data about such characteristics as frequency response, impedance and dynamic distortion curves to take what the company refers to as a 'fingerprint' of the reference amplifier.

This is where Kemper says its proprietary technology is superior to the dynamic convolution algorithms used in the modelling process by other manufacturers. Visit the About Profiling section of the Kemper website to be baffled or enlightened depending upon how much attention you paid in science lessons at school…

Next, if you're modelling a dirty amp sound you can use the 'refine profile' function and strum some big chords while the Kemper uses the intermodulation generated to create an even more accurate profile. Once you're happy, you can store the sound in the KPA as a new rig and bring the Kemper's onboard gain, preamp definition and power sagging controls into play to further tweak your newly created sound.

Like us, this is where you'll probably experience feelings of disbelief and a 'eureka' moment when you realise how accurately the Kemper has captured the sound of the amplifier/signal chain that you are profiling. If it's a high gain circuit (as evidenced by our experiments with the EVH 5150-III) you have the added bonus of all extraneous noise being removed from the equation.

So you can play with serious levels of filth with none of the associated noise and without the noise gate closing audibly or stifling sustain.

Admittedly, the experience of playing a digital profile through a full-range speaker system doesn't feel the same or enable the same level of interaction between player and equipment as it does when you are in the room with a conventional valve amplifier, but that's not necessarily a weakness in a studio context. These days, it's commonplace to track guitar parts in the control room while the sound coming back through the studio monitors is a mic'd amplifier situated in the live room, removing the physical immediacy between musician and amplifier but allowing for a much better feel of the way parts sit in the overall band mix.

This is the context in which the Kemper truly excels and it proves possible to create amp profiles that are good enough to fool three sets of very experienced ears during our testing process. At one stage, we even find ourselves unplugging the reference amplifier just to make sure that it's definitely the Kemper that we're hearing and there isn't some elaborate hoax taking place!

We've heard various approaches to digital modelling sound good in the studio before but this is as close to a 'real' mic'd valve amp sound as to be indistinguishable.

The Profiling Amp's performance mode - which will apparently enable you to arrange your rigs in setlist order, among other things - is a firmware update away at the time of writing. But live use is still catered for by MIDI switching and flexible outputs that facilitate feeding a cab sim-free signal to a third-party power amp and normal guitar cabinet onstage via the monitor output, while the main output feeds the whole profile, cab included, to the PA.

Outside of the studio and onto the stage, this old-fashioned guitar player can't imagine retiring his much-loved Dr Z just yet, but there are certainly plenty of big-name players out there such as Machine Head's Phil Demmel and Animals As Leaders' Tosin Abasi currently using the Fractal Audio Axe-Fx for whom the idea of taking a digital rig out on the road is less alien. It's certainly a way to keep tour costs down, and the advantage of the Kemper is that you can take profiles of the exact analogue amp sounds that you used on record out on the road with you.

We can't emphasise enough that the Kemper is a product that is best suited to serious musicians. For everyday bedroom noodling, a low-end modelling amp is ideal.

But if you're the type of guitarist who records regularly, or a producer who wants 24/7 access to a personal library of refined and tested guitar sounds wherever you happen to be on the planet at any given time, the Kemper Profiling Amp is the product of the decade so far.

It's not difficult to imagine that there will be demand for this technology in a more convenient rackmount housing, or a more robust, roadproof enclosure. The important thing to remember is that the KPA is one of the modern breed of products that is growing up in public, with direct input from its user base.

Firmware updates are simple thanks to the unit's USB connections, so you are buying into a constantly evolving platform that is only going to get better. These are truly exciting times.