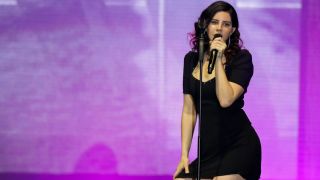 Lana Del Rey has said that her much-publicised copyright dispute with Radiohead is over.

After performing Get Free, the song at the centre of the case, at the Lollapalooza festival in Sao Paolo over the weekend, she’s said to have have told the crowd: “Now that my lawsuit’s over, I guess I can sing that song any time I want, right?” She didn’t elaborate on how the dispute had been settled.

This announcement follows Del Rey’s Tweet in January, in which she said: “It’s true about the lawsuit. Although I know my song wasn’t inspired by Creep, Radiohead feel it was and want 100% of the publishing - I offered up to 40 over the last few months but they will only accept 100. Their lawyers have been relentless, so we will deal with it in court.”

Radiohead’s publishers responded by saying that, although they had been in discussions with Del Rey’s representatives, “no lawsuit has been issued and Radiohead have not said they ‘will only accept 100%” of the publishing of Get Free.’”

It remains to be seen if Radiohead or their publishers will pass any further comment on the case or be credited as co-writers of Get Free.