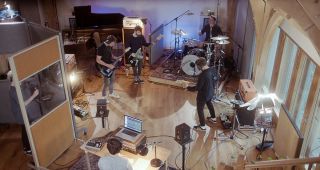 In this tutorial we’ll be discussing the basics of recording a full band live in the studio.

As we will discuss, this method of recording can introduce a number of issues that you will need to overcome, however the advantage of having the band playing together and vibing off each other can often lead to the most effective results!

Specifically, we'll be looking at how Audient used their powerful iD44 audio interface alongside two of their 8 channel mic preamps to record UK rock band Homebound.

As the musicians are going to be playing at the same time, which is often something that’s genre specific (Rock, Jazz), you’re going to need some additional mic pres to get capture the whole band simultaneously.

The great thing about iD44 is you aren’t limited to just four channels. iD44’s ADAT inputs mean you’re able to hook up an additional 16 channels of mic pres such as Audient’s 8 channel mic pres, ASP800, ASP880 or something similar.

Once everyone’s tuned up, drums skins have been replaced and guitars restringed, you’re going to want to think about positioning that band to get the most separation whilst still maintaining the live feel of the band. Here are a few tips...

1. Record the band live and overdub the vocals after

Often a good vocal performance transforms a good song into a great one. If the band want to record the vocals live then invest in a great hypercardioid microphone (Shure Beta 57/58 for example) and point the null at the drummer.

Use isolation panels with windows to separate loud & quiet elements of the band and to ensure the musicians can see each other and get the best performance. If possible place drums/guitar cabs in isolated room.

When using more than one mic you’re going to start running into phase issues. The easiest way to avoid this is to minimize unnecessary mics. Introducing more mics than you need can create comb filtering issues when it comes to mixing, something that’s hard to fix in the mix. The 20 inputs iD44 provides will be more than enough to record the more demanding of sessions. But by all means throw up as many mics as possible and experiment and find out what works for you.

4. There will be spill and that’s okay!

Sometimes you’ve got to embrace it to get the best recording and mix possible. However, if the spill is causing your mix to sound messy then you can always use a gate to control it. We recommend cutting out sections of the audio where the instruments aren’t playing.

If you’re recording the whole band live, including the vocals, then you should be matching your mix to the level of the vocals. In most songs, this is the most important element so matching the rest of the track to them means they’re not going to get buried.

Making sure you have an interface with high quality converters is paramount to letting you hear the detail.  Therefore something like iD44 which has class leading converters with 126dB of dynamic range will give you a more honest and accurate translation of your recordings meaning it’ll be easier to make better mix decisions more easily.

To show what you can do with just 20 inputs, Audient recorded UK rock band Homebound’s track ‘Headspace’ live at Rimshot Studios with iD44, ASP800 & ASP880. Hear how it sounds below.