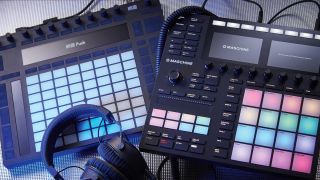 While there are other ‘hybrid’ controller- software systems out there, NI’s Maschine and Ableton’s Push remain the titans of the software-specific control market.

Since the arrival of the Mk3 version of NI’s core Maschine controller, the devices are now closer than ever in terms of hardware features, functionality and even looks, so we’ve put them head-t-head. Read on to discover which product is best for you.

Both Push 2 and Maschine Mk3 have similar desktop footprints. Push is around two inches wider, so is the larger of the two overall. Build quality is similarly high on both controllers, too.

Design-wise, since Maschine got its sleek new look, there’s very little to separate the two controllers beyond minor matters of personal taste. Both feature quality, full-colour screens, albeit of slightly different shapes. Push’s long, thin screen is at its best when used to slice and tweak samples in Simpler, allowing the full audio waveform to be displayed across the length of the screen. Maschine’s taller screens, meanwhile, allow for longer virtual mixer faders.

Both Push and Maschine deliver quality pads that feel great and are plenty responsive, with both also offering punchy, customisable backlighting. The main difference between the two is the number and size of the pads; Push’s are smaller, but there are four times as many as on Maschine Mk3. As a result, Maschine is the better for finger drumming and MPC-style pad jamming. However, the extra pads on Push give it considerably more range when step sequencing or playing melodic parts.

Both controllers are very capable in the pad department, although hip-hop heads and those raised on the classic MPC workflow will likely gravitate towards Maschine.

Maschine Mk3 and Push 2 support optional power supplies, meaning that both can run solely on USB power, but you’ll need to plug into the mains to get full brightness from the screens and pads. The drop in brightness is more significant with Push than Maschine, to the point that you’ll likely find yourself wanting to plug Push in whenever possible.

Maschine has a built-in audio interface, too. It’s a fairly basic 2-in, 2-out affair and unlikely to replace your current studio interface, but its inclusion makes Maschine Mk3 far more self-contained. The same goes for MIDI I/O, which is present on Maschine Mk3 but not Push 2.

Both offer exceptionality tight control over much of their associated software. Beat making, sampling and creative endeavours are served best, but both also offer decent mixing facilities and some arrangement control.

Ultimately, any argument over depth comes down to the software end. Here, although Maschine has grown into an exceptionally deep production environment, Live ultimately wins out through the sheer fact of being a full DAW that includes audio recording and editing (although these areas aren’t particularly well covered by Push.)

Maschine has an RRP £100 lower than Push. It also includes the full Maschine application, plus Komplete Select, which includes Massive, Monark, some solid effects and a decent crop of Kontakt instruments.

Push ships with Live Intro but, realistically, you’ll need to upgrade to at least Standard, if not Suite, to get the most out of it. As a result, you’ll need to shell out considerably more for the full Live/Push experience, even factoring in the need to buy a basic DAW to host Maschine.

With a healthy dose of included software and onboard I/O, Maschine Mk3 is great value, versatile and self-contained.

Live 10 is one of the best DAWs out there, and won’t find better Live control than that offered by Push. If it’s depth you’re looking for, this is where you’ll find it.