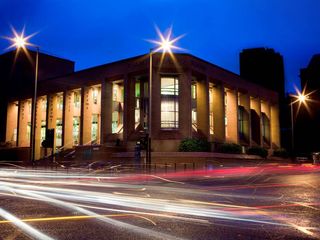 The RCS in Glasgow will be hosting the event.

PRESS RELEASE: Yamaha Guitars has announced it is to support the highly successful and popular 'Big Guitar Weekend', now in its fifth year andhosted by The Royal Conservatoire of Scotland in Glasgow - previously known as the Royal Scottish Academy of Music and Drama.

This will be one of the first major events taking place in the Conservatoire following its name change on September 1st.

Held between November 4th and November 6th, the weekend is a superb festival of classical and jazz guitar concerts, masterclasses and workshops for guitar enthusiasts.

A highlight of this year's event will be the Grand Final of the inaugural Scottish International Guitar Competition.

Another innovation this year is a new Jazz Course hosted by Kevin MacKenzie and Malcolm MacFarlane, both hugely respected artists from the Scottish Jazz scene.

The hugely popular concert series, which features a stellar line-up of international stars, is headlined by Czech superstar Pavel Steidl, returning to Glasgow for a second time. This year Pavel will be performing with the amazing David Tanenbaum, highly acclaimed both as an outstanding performer and educator.

Travelling in from Brazil is Scotsman Paul Galbraith, who has enjoyed an international career spanning three decades. Complementing Paul will be the Agnew and McAllister Duo who this year celebrate their tenth anniversary as one of the most sought-after flute and guitar duos in the world.

Allan Neave, Artistic Director of BGW 2011 said: "This will be the most ambitious programme yet. I am also delighted that a group of young musicians from the Yehudi Menuhin School will be making their first visit to the Royal Conservatoire of Scotland - they will have a great time working with our teaching team and playing to the enthusiastic Glasgow audience"

Yamaha's Martin Adam commented: "It's a real privilege to be involved in this year's festival, we are enormously impressed by the ambitions of the organisers, and the world-class line of of guitarists.

"The event promises to be a celebtration of outstanding guitar talent. We are sure the Big Guitar Weekend will inspire more people to play and is perfectly in tune with Yamaha's commitment to creating new music makers."

Full details can be obtained from http://www.bigguitarweekend.com or by calling the RCS Box Office on 0141 332 5057