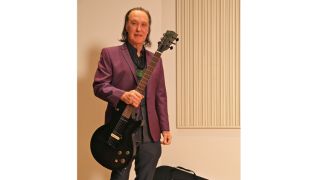 Meet the legendary Kinks guitarist in person - and bag a tasty Les Paul...

To celebrate legendary Kinks founding member and guitarist Dave Davies' first UK concert in over 13 years, we've got an incredible Gibson BFG Les Paul guitar and a pair of tickets to the show to give away.

Taking place at London's Barbican on Friday 11 April, the gig will see Davies perform Kinks classics alongside his extensive collection of solo material.

A speaker-slashing icon and one of the most distinctive guitarists the UK ever produced, Davies' guitar work was central to The Kinks legacy and retains its potency to this day.

To celebrate Davies' return to the live arena, we've teamed up with Gibson to give away a stripped-down rock & roll flamethrower, the Les Paul BFG, one of the most powerful Les Pauls Gibson ever created. Blasted back to the bare essentials, the BFG is the Les Paul for guitarists who want it loud, raw, and wild, Davies style.

During its limited production run between 2007and 2012, the BFG gained quite a following thanks to its high-powered Burstbucker 3 pickup at the bridge and screaming single-coil P-90 in the neck. No binding, no figured top, no finishing touches - these elements, or lack thereof, give the BFG its distinctive and eye-catching look.

To be in with a chance to win the guitar, all you need to do is click the link below, fill in your details and answer the question. The winner will get to collect the guitar from Dave Davies personally at the Barbican gig.

The competition is only open to UK entrants only and closes on 7 April.