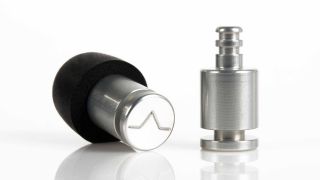 We're all gearheads here at MusicRadar, but we're aware that, really, our ears are our most important assets, so protecting them is essential - and Flare Audio's Isolate earplugs could well be the most musician-friendly yet affordable way to do that.

Launched via Kickstarter, the Isolate plugs reflect sound away from the ears, rather than absorb it like regular earplugs, reducing overbearing bass frequencies from reaching your lugs.

This promises to provide clear sound at gigs, with increased detail at safe listening levels, by blocking sound from entering the ears and attenuating all frequencies equally.

Two versions are available: the Isolate (£23), which packs an aluminium frame, and comes in a variety of colours; the Isolate Pro (£46), meanwhile, is constructed from titanium for increased durability and isolation.

Both sets come with three sizes of Earfoams, which secure to the Isolate via tip connector ridges, and promise a "satisfying click" when attached. We like the sound of that.

Flare Audio's Isolate earplugs are available from Kickstarter, where they were launched in July, before quickly smashing the company's £25,000 target - at the time of writing, it's reached a whopping £202,000. Looks like we're not the only ones who care about the state of our lugs, then…