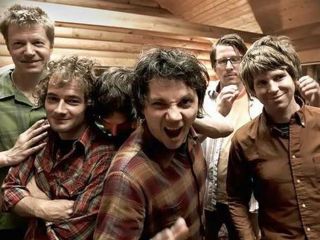 Wilco's new album Wilco (The Album) leaked the other night, well ahead of its 30 June release date, so the band have decided to offer fans high and low quality streams on their website.

In keeping with the inventive title of the new CD, the band is calling the streams Wilco: The Stream. Are these guys jokesters, or what?

Drummer Glenn Kotche recently spoke with Rolling Stone about the band's follow-up to Sky Blue Sky. Asked about Wilco (the song) - no, you're not seeing things; these guys are on a roll - Kotche described the composition as "a great, upbeat song professing our love for our fans."

Of the guitar-centric Bull Black Nova, Kotche said, "That one's a really intense, powerful song. It's got a static groove that's really insistent. There're lots of great guitar moments on that song." (We've heard it, and we have to agree. Check it out for yourself, along with the whole disc, right here.)

If you want to see Wilco the band play Wilco (the song) from Wilco (The Album) - now we can't stop! -they'll be touring extensively this summer, highlighted with performances at both Bonnaroo and the 10,000 Lakes Festival.

Kotche has said that the setlists will vary night to night, and the band will dig deep into their extensive catalogue.