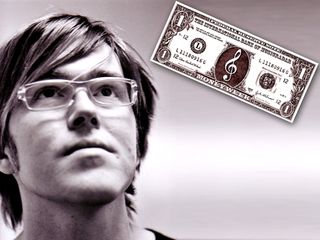 PRS for Music is a UK organisation that encompasses both the PRS and MCPS and collects and distributes royalties on behalf of its music writer, composer and publisher members. To coincide with Money Week on MusicRadar, we caught up with musician Mark Gordon to talk about his experiences with PRS for Music.

These days, Mark primarily composes bespoke music for television shows and advertising, but his career as a musician has seen him perform across the globe alongside the likes of Röyksopp, Peaches and LCD Soundsystem and remix tracks for some of the world's hippest labels.

Find out more about Mark's company Score Draw Music here, but first, read on to find out why PRS for Music is such an important organisation for working musicians.

What's the simplest way to explain what PRS for Music does?

"It collects revenues for a music copyright owner. It sounds formal but essentially that's the role it performs. It allows IP creators to have royalties they are due as composers and songwriters collected and distributed to them, from any play their music has on film, television, online and radio; as well as if the music they write is played in any 'live' scenario, from a guy playing original music at a gig in a pub, to someone covering a track you have written, and performing that cover at Wembley."

At what stage in your career did you decide to join the PRS and why?

"When I was 18 I recorded my first Peel session, and was aware that as well as the BBC payment, I was also due royalties from the broadcast. In those days - hang on while I grab my pipe and slippers! - this meant writing to the PRS, who sent you marvellous green A4 forms.

"After completing an MA in nano-technology I managed to fill them in, and sure enough, I started receiving royalty payments. That was 18 years ago."

Some people might think it's a complicated process - is it still difficult to sign up and get paid when music that you have written has been broadcast on television and/or radio?

"Compared to what it was like then, it's now actually remarkably simple. If I'm writing say, 50 cues for a single BBC drama, submitting all the information would take me about 20 minutes. Incredible. It's all done online on a very simple section of their website."

Is it only worth signing up to the MCPS if you have a record deal?

"Absolutely not - it costs so little extra, and some of my largest payments have been from tracks I have submitted for television that have been mechanically reproduced in some way for different territories. It's a no-brainer for me."

Do you make more money from royalties or physical/digital sales?

"For me, royalties. They can potentially far outweigh the upfront fees I earn for composition. The same was true when I was in a band. One of the biggest payments we ever received was for a DJ set at a festival.

"Our performance fee was tiny but we were playing our tracks to 20,000 people. That gave us a significant PRS payout. Or when a track that I had co-written in a band was used in the US television show Malcolm In The Middle. The royalties generated repaid our entire publishing advance in one fell swoop."

Which of your tracks has made you the most money and why?

What is the biggest payout you've heard about an artist receiving?

"The right track on the right synch can earn you a low five-figure sum if it's repeated on the television constantly, usually in an advert."