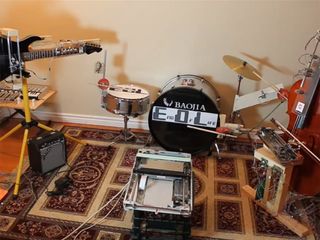 End Of Life (as we know it)

Move over, The Trons, there's a new robotic four-piece in town called End Of Life whose cover of Marilyn Manson's The Beautiful People is more visceral than many we've seen. Check out the video above to see them in action.

This from the creator, bd594, via YouTube: "I would also like to thank jtodd900 for his YouTube video 'The Beautiful People guitar cover WITH TABS' [sic]. It was very helpful with respect to programming my Robot Guitar. Muting the strings was a bitch but if you look at the solenoids on Fret 4 and 8 you will see that I covered the pads with foam and velvet. It is soft enough to stop the strings from vibrating."

Another video explaining the circuits, parts and process behind the band 'may' follow soon.