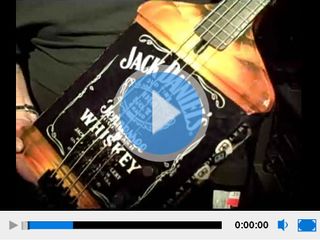 Yesterday, MusicRadar brought you on stage before Chickenfoot's soundcheck in New York City and gave you the video lowdown on all the cool guitars and gear Joe Satriani is using on tour.

Now we bring you back to the scene and talk to the techs for both bassist Michael Anthony and drummer Chad Smith.

In the video below, Michael Anthony's longtime tech, Dugie (he's worked with the bassist for 29 years, much of that time in Van Halen - imagine the stories!), shows off the four main instruments Anthony uses onstage, including the crowd-favorite Jack Daniel's bass, made by Yamaha.

Dugie also details Anthony's wireless gear and the new Peavey amps and cabinets that are being used on tour.

After speaking with Dugie, MusicRadar sat down behind Chad Smith's beautious Pearl Masterworks kit (complete with a one-of-a-kind custom paint job by Orange City Choppers) and got the skinny from the new man on the Chickenfoot tech team, Three.

In additon to pointing out a most character-specific addition to Smith's drum setup (you have to watch the video below to find out), the good-natured Three also answers the burning question on everybody's mind: "How'd you get your nickname?"

By the way, if you're interested in picking up Chickenfoot's slamming debut album, Amazon.com is offering a download for the fan-friendly price of just $3.99. But the deal is only good from 5-8 June. (If you go there sooner, it'll cost you $9.99. Hey, never let it be said that MusicRadar didn't try to save you a few bucks.)