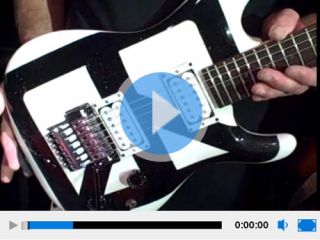 The other day we told you of Chickenfoot's roof-raising performance at the Fillmore at Irving Plaza in New York City. MusicRadar was on the scene, and we decided to check out the band's gear and get a little inside scoop on the backstage goings on.

In the video below, Michael Manning, Joe Satriani's longtime guitar tech, gives us an up-close-and-personal guided tour of Satch's main Ibanez JS guitars, emblazoned with graphics such as the Chickenfoot logo and some of Satriani's own unique doodlings.

In addition, Manning details Satriani's extensive pedalboard setup, outfitted, as you might expect, with the guitarist's own Vox signature pedals like the Satchurator and the Time Machine. (In fact, the pedalboard is so complicated that Manning even gets lost trying to trace the routing of effects. Too funny!)

Next page: A backstage interview with Satriani himself

After chatting with Manning, MusicRadar paid a visit to Satriani himself, who was chilling backstage before soundcheck. It was the next-to-last date of Chickenfoot's hugely successful "road test" of shows before they hit Europe and return to the States to play bigger venues in the late summer and fall.

As you can see in the video below, Satriani was his usual super-serious self. Not!