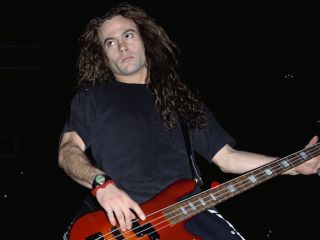 A public memorial is set for former Alice In Chains bassist Mike Starr on Sunday, 20 March between 4-11:30 pm PST at 'The Fountain' (Seattle Center) in Seattle, Washington. Starr died Tuesday, 8 March, at the age of 44.

Starr, the original bassist for Alice In Chains who left the group in 1993 because of a growing dependency on drugs, was found dead at the Salt Lake City, Utah house of Spender Rodden.

According to the Salt Lake City Tribune, Starr was living with Roddan, a fellow musician whom had been introduced to him by a friend, Travis Meeks. Meeks was the singer and guitarist for the band Days Of The New. It was Meeks who found Starr's body at Rodden's house at approximately 1pm, Tuesday 8 March.

"I don't think [Starr's death] was intentional," said Roddan. "Our deal was he had to be clean. He said he was going to make me proud."

While living with Rodden, Starr was apparently getting back to making music. He had been planning to join Meeks on the road for some East Coast dates that had been booked for the weekend of 18 March.

At this time, a funeral for Starr has been delayed pending official autopsy and toxicology reports. Foul play is not suspected in the bassist's death.