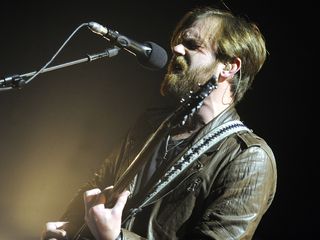 What is going on with Kings Of Leon? More specifically, what's up with frontman Caleb Followill? That's what fans are asking today after the band cancelled last Saturday's show (30 July) in Houston following Caleb splitting the previous night's gig in Dallas (29 July), citing excessive heat and a loss of his singing voice. (Note: See update below)

Eleven songs into the Dallas show, Caleb (see the video above) told the crowd, "For the record, I'm not drunk, I'm just fuckin' hot... I'm about to fall down here because I'm so fuckin' hot." Before he left the stage, he said, "I'm gonna go backstage and I'm gonna vomit, I'm gonna drink a beer and I'm gonna come back out and play three more songs."

And with that, Caleb walked off to boos and jeers from angry fans. When it was clear that he wasn't returning, it was up to his bassist brother, Nathan, and his guitarist cousin, Matthew, to address the audience.

An official statement from the band released the next day claimed that Caleb "suffered from heat exhaustion and dehydration during last night's Dallas performance, causing his vocal chords to seize," and noted that the group had rescheduled their Houston performance for 21 September.

In postings on social media, however, band members are telling a bit of a different story.

"Dallas, I cannot begin to tell you how sorry I am," Jared wrote on Twitter shortly after the aborted show. "There are internal sicknesses & problems that have needed to be addressed. No words." The next day, he added, "I know you guys aren't stupid. I can't lie. There are problems in our band bigger than not drinking enough Gatorade."

Following the original posting of this story, Kings Of Leon have canceled the remaining dates on their current tour. According to a band representative, Caleb Followill has been "suffering from vocal issues and exhaustion," and the group has opted to scrap the tour rather than play shows that are not up to their standards.

The canceled concerts will not be rescheduled. The band is scheduled to hit the road again on 28 September in Vancouver, a show originally scheduled for 14 September.