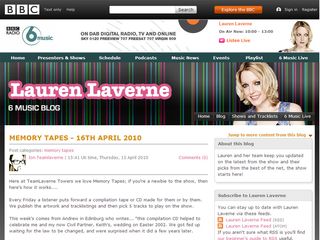 The UK music industry has laid out the case for saving BBC 6 Music. The station was targeted for closure by director general Mark Thompson in March as part of a major shake-up by the corporation.

The decision has attracted widespread criticism from the music industry and artists, who point to the network's importance as a showcase for vibrant new talent. Following a summit meeting held on Wednesday 14 April between senior music industry figures and the BBC Trust, BPI chairman Tony Wadsworth spoke about the unique role played by 6 Music:

"We cannot see the sense in pulling the plug on a successful outlet for artists, both new and established, that are not being played on either Radio 1 or 2. 6 Music has significant cultural worth and public value that you can't measure by audience numbers alone, and it provides programming that commercial radio does not," he said.

The music industry delegation was led by record industry body the BPI - formerly known as the British Phonographic Industry - included big hitters such as David Joseph, chairman and CEO of Universal Music, and it set out a list of reasons for retaining 6 Music. These included the station's role as a shining example of the BBC's public service mission and as a beacon in the cultural life of the nation.

"(BBC 6 Radio) also provides many new and heritage artists with their only opportunity of radio play," the delegation continued. "It takes programming risks on new artists when they are often in the developmental and most creative phase of their career - supporting and encouraging creative risk-taking by British artists to a degree other radio stations do not. Success on 6 Music leads to some of those artists getting played on Radios 1 and 2 and commercial radio."

The BBC Trust confirmed that part of its public purpose is to bring forward new talent. The Trust went on to confirm that this will be a genuine consultation and take into account the strong views expressed by industry.

Want to join the campaign to save 6 Music? Go here.