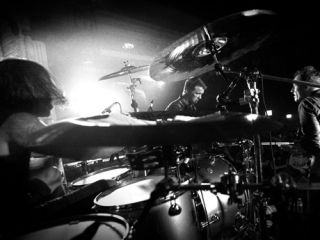 Will you hear a Them Crooked Vultures CD? We're counting on it

Them Crooked Vultures - drummer Dave Grohl, singer and guitarist Josh Homme and bassist John Paul Jones - have been tearing it up live on both sides of the Atlantic.

During the past few months, the brand-new supergroup has been playing volcanic 80-minute sets comprised of songs nobody has yet heard. You want Zeppelin jams? Go somewhere else. Want Foo Fighters hits? Wrong gig.

In other words, they're doing what they want. And that may extend to the way they release - or don't - the music they say they've been recording.

In an interview with Arthur, Homme and Jones were asked about playing music that is completely unknown to the audience.

"My year of reading PT Barnum is finally coming into play," said Homme. [snaps fingers] "This notion of saying nothing, of keeping a secret and doing it in a way that's not elitist but that's like, 'You wanna come in here and hear? [whispers] We have a secret. That's all that I can tell you. But you're involved.' You know?

"And I like this notion of people having to listen. And for us to work out our things too: I mean, this is certainly the hardest music I've ever played! Not intentionally, but it was written in the studio, and it's, Ah, ah, oh! [gestures trying desperately to play guitar notes] But it's been great. Sold-out tour…"

Asked if they felt they had to release an album, Homme said, "No. Not necessarily."

Jones added, "Theoretically, no." But the bassist then said, "I take the idea that when we do put the album out, that it be an entirely different set of songs [to what the band is currently playing] - so that nobody will ever know what they're about to hear."

To which Homme then said, "We are putting out a double record for sure on vinyl. There may even be a third half-side…like a picture disc."

Of course, they're probably just goofing. Word is that Them Crooked Vultures' debut album will be issued on 23 November.

(via Arthur and The Daily Swarm)