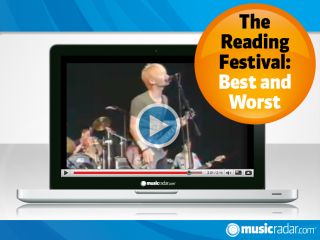 It's one week to go until the Reading/Leeds Festival, the grimiest weekend in the UK music calendar.

Fast-forward to 2009 and it's Kings Of Leon - biggest song called Sex On Fire.

Proof that the olde Reading Festival has simply got 'sexier' over the years. Or has it?

Here's MusicRadar's pick of the good, bad and sometimes quite ugly. Watch carefully before you pack that tent…

Can you imagine the state of backstage after this lot had finished with it?!

Nirvana go back to School

Just weeks before the release of Nevermind, Nirvana's ferocious daytime set at Reading 1991 - featuring interpretive dancer Tony - is legendary. The year that followed would bring them unimaginable fame, fortune and darkness, not to mention a headline slot on the main stage.

Deadmau5 bigs it up

Reading's emphasis may be on rock, but there is a dance stage, too. Next Sunday, it'll he headlined by Deadmau5, who's already made one trip down the M4 corridor this year to play Radio 1's Big Weekend in Swindon.

At 5:46 it certainly feels like 'forever.' How these Bay Area cock-rock C-listers got on the Reading stage is anybody's guess.

Techstep rejiggery and orchestral emoting are all well and good but nice to see rocking out isn't beneath them Radiohead all the time.

Just before lyricist and non-playing 'guitarist' Richey Edwards disappeared for good, James Dean Bradfield and Nicky Wire admit things have reached a "zenith of shitness" at Reading '94. They could laugh about it back then...

Metallica return with Master Of Puppets

From 2008, Metallica deliver the rawk. BUT! How serene is that front-row 'headbanging'?!

Muse are Knights Of Cydonia

Preposterous music from Britain's most brilliantly preposterous rock band. Borderline genius/idiocy, but made for arenas.