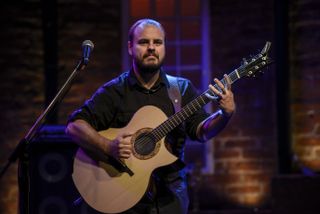 ACOUSTIC EXPO 2014: As far as 'stars' go, Andy McKee has to be one of the most unassuming. Inventive, hard working and staggeringly talented, he omits an aura of humble self-assuredness. After taking those tentative steps over 20 years ago to begin performing his music for others, and releasing his first album, Nocturne, in 2001, Andy has been quietly chipping away at the coal face; moving from "trying to make ends meet" to touring the world and having baby girls named after his song Rylynn.

With a gorgeous new EP, Mythmaker, recently released, now is a good time to unpick the musical evolution of one of modern acoustic's favourite sons...

You have spoken before about loving music from a young age, but can you remember the first band/artist who truly grabbed you and made you want to become a musician yourself?

"It was definitely Eric Johnson - when I heard a bit of Cliffs Of Dover on the radio when I was 12. It was really a transformative experience. I had enjoyed some instrumental music before but I was never so captivated as I was when I heard Eric play the guitar.

"I was heading into my teenage years and life can take on new struggles and meaning at that time, but I found a great refuge in music and the guitar. After playing for about a year, I knew that I wanted to pursue a career in music."

Your first guitar was a nylon string bought by your father when you were 13. What was your drive for getting into guitar at such a young age?

"Again, it was all about hearing Eric play Cliffs Of Dover."

How did you make the jump from playing a nylon string guitar to listening to shred music - why did the likes of Metallica and Joe Satriani speak to you so much?

"Well, the truth is I was already into hard rock and metal before I picked up a guitar. I got into Iron Maiden when I was eight years old, and then Metallica when I was 10. The only reason my first guitar was a used nylon string guitar was because it was the cheapest one available! I got an electric guitar as soon as I could."

Did you ever imagine yourself playing lead in some awesome thrash metal band during those years?

"Oh absolutely! I was in a couple of bands in high school and we played a lot of covers and I wrote a couple tunes back then. We were playing stuff from Rage Against The Machine, Dream Theater, Helmet, and a few other bands. I definitely thought I'd end up playing lead guitar in a metal band. Sometimes I kick around the idea of doing an electric album... I have no idea if that will ever happen. I've got friends I'd like to collaborate with, though, for sure!"

And then, when you were 16, you saw Preston Reed live. How did his playing move you to explore more of the acoustic guitar?

"I've got these very clear memories about my musical life and this is the second pivotal moment in my development. Seeing Preston was just unreal to me. The way he was using the guitar was so utterly fascinating. He had tuned the guitar in some bizarre way, was playing with his left hand over the neck, and was hitting the guitar body to get percussive sounds. It was everything I wanted to be able to do musically. From that point on, playing lead guitar just didn't seem like the way for me to express myself. I had always loved the great textures you could get from chords and using these new tunings seemed like a way to find new chord voicings, and possibly come up with melodic ideas and play them at the same time."

You quit school to further your guitar studies. What kind of school career were you setting to one side - were you a promising student?

"I dropped out when I was 16 and got a general education diploma after some testing. Personally, I never found the school environment conducive to learning. I did well when I was there, but I was often not in attendance. I like to learn on my own or in smaller settings. I even attempted college but I lasted exactly one day. My plan was to hopefully become a performer, but I was looking at being a guitar teacher too."

What do you remember about your first live performance?

"My first live performance was when I was 14. I had only been playing a year but some friends and I put a band together and played at the talent show for our middle school. We decided to do a cover of Enter Sandman by Metallica but there was a problem: none of us could really pull off the James Hetfield vocals. So, it ended up being an instrumental cover with drums, bass, three guitars and no vocals. It was as awful as you are imagining it to be! I was nervous as hell and botched the solo, but we felt like kings and everyone loved us which was nice since we were the outcast rock 'n' roll kids."

How long did it take for you to write your first album, Nocturne? Did you learn anything from it that helped you prepare for later albums?

"I think I wrote those tunes over a three-year period. I only really recorded it because a guy that worked at the music store I taught at kept telling me to do a CD. I went for it and had 1000 copies made which I sold at coffee shops and little places that I would play back in 2001. I don't know if I learned much from the recording of that first album. I still really hate recording. I like to perform live much more. There's something so lifeless about recording that bothers me."

When did you first notice that you were making an impact with your music?

"To be completely honest, I still have a hard time coming to grips with it. I still can't quite believe how things have turned out for me. There's still a part of me that feels like the guy trying to make ends meet teaching guitar lessons and writing tunes in my bedroom. I was always kind of a loner type, never had any girlfriends or too many friends, but then I suddenly had this massive exposure on the internet and it completely changed my life.

"Seeing all the kind words and comments on YouTube and Facebook made a huge impact. But if I were to nail down a moment when it really hit me, it would be when I learned people were naming their daughters Rylynn [taken from the 2005 album Art Of Motion]."

Drifting is one of your standout songs. Why do you think it occupies such a special place in peoples' hearts?

"It's hard to say exactly. I would guess that it's because for some people, it may have been their first exposure to modern acoustic guitar music. It's not the most amazing thing ever written - I mean, I wrote it in my late teens - but it's got a little melody and the percussive stuff which is interesting.

"One of the most powerful things about music is its ability to create nostalgia. For some people, that tune in particular might take them back to 2006. It may have been one of the first videos some people saw on YouTube!"

Do you think uploading your music to YouTube was one of your smartest moves?

"Oh absolutely. At that time I was a guitar teacher at a music store in Topeka, Kansas. I would occasionally get opportunities to perform but they were few and far between. Putting the videos on YouTube was another pivotal moment and for me it meant reaching millions of people on the planet. Suddenly I was getting opportunities to play all over the world. Since then I've been out touring pretty full-on, turning that internet phenomenon into a career that supports my family."

What have been your proudest achievements to date and why?

"Definitely having two beautiful children. But, other than that, I would say my top four would be opening for Dream Theater, because they were one of my biggest influences as a teen. Playing with Prince because he is a sheer musical genius. Playing with Don Ross, Preston Reed and Billy McLaughlin, who are three of my four biggest acoustic guitar influences (sadly the fourth, Michael Hedges, passed away in 1997). Playing with Eric Johnson because he set me on the musical path.

Finally, how has your musical journey so far shaped your brilliant new EP Mythmaker?

"As the years go by, I think I am getting better at expressing what I want with music. Interestingly, it doesn't always involve solo acoustic guitar. I feel like a liberation happened in my heart and mind and I don't feel burdened with the idea that I have to write solo guitar music all the time. It feels good. As always, though, I will do my best to write evocative and affective music for anyone who cares to listen."

Mythmaker is available now from Amazon UK. Andy McKee will be touring internationally in support of the EP throughout 2014, with a 39-date US tour begining September 16.