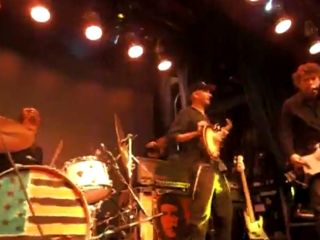 Morello ready to rip it with 'Tadgarden'

Fans who recently jammed Seattle's Crocodile Cafe to see Tom Morello got more than they bargained for, as three-fourths of Soundgarden reunited on stage for the first time since 1997.

"I haven't been this fucking excited about something in a long time," Morello told the shocked, screaming crowd as he strapped on a guitar to play rhythm with the reunited trio. "It's like I won some type of contest or something."

And with that, guitarist Kim Thayil, drummer Matt Cameron and bassist Ben Shepherd, along with guest vocalist Tad Doyle (he of the aptly named named Tad), took to the stage - amidst some very vocal anti-Cornell sentiments from the audience - to join Morello on three Soundgarden oldies-but-goodies.

The band, dubbed 'Tadgarden,' ripped through raucous versions of Nothing To Say, Hunted Down and a scalding take of Spoonman (see video below).

Granted, Doyle's singing style could never be mistaken for Cornell's, but that didn't matter to the ecstactic fans who roared their approval.

After the impromtu set, a beaming Tom Morello told the cheering crowd, "That's fucking exciting! You paid $15 for that!"

So far, Chris Cornell hasn't Tweeted his review on his Twitter page.