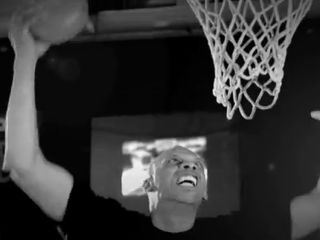 By naming his band The Smashing Pumpkins, you'd think that Billy Corgan was a big fan of the gourd-like squash. But as he explains in the above video, he's never once smashed a pumpkin. Heck, he doesn't even like pumpkin pie!

However, if there's one thing Corgan takes as seriously as music, it's sports, and recently the Pumpkins main man has forged a friendship with Kareem Abdul-Jabbar, who, despite having retired in 1989, retains his title as the leading scorer in NBA history.

Corgan's admiration for Kareem is obviously mutual. While Billy plugs the basketball legend's film, On The Shoulder Of Giants, in the video below, Abdul-Jabbar touts The Smashing Pumpkins' upcoming album, Oceania - after slam-dunking a pumpkin, that is!

In other video news, a clip for the new Pumpkins song, Owata, will debut today, Wednesday 29 June at 9pmPST/midnight EST (that's 5am 30 June, GMT) via Yahoo!. Directed by Robby Starbuck, it's the first-ever video to be filmed with the Red Epic M camera. Teased Corgan via Twitter, "…first cut is 12 min long, like a short film. Second cut will be music video only! Good fun."