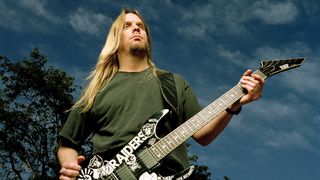 Heidi Robinson-Fitzgerald, the group's longtime publicist, confirmed the news in a statement which reads:

"Slayer is devastated to inform that their bandmate and brother, Jeff Hanneman, passed away at about 11AM this morning near his Southern California home. He was 49. Hanneman was in an area hospital when he suffered liver failure. He is survived by his wife Kathy, his sister Kathy and his brothers Michael and Larry, and will be sorely missed."

Hanneman's unique lead/rhythm guitar style, which complemented that of fellow lead/rhythm player Kerry King, was an indelible part of the Slayer sound. Hanneman composed the music for many of the band's fan favorites, songs such as Angel Of Death, South of Heaven, War Ensemble, Raining Blood and Seasons In The Abyss.