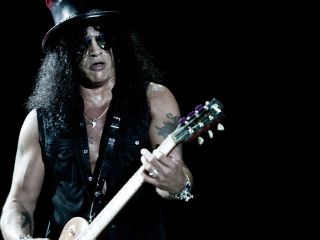 Slash will begin mixing his second solo album on Monday, 13 February, but as he writes on his Twitter account, "The rough mixes sound great. It's a really solid record. [I] can't wait to get it out there!"

The top-hatted guitarist has posted a new webisode (above) in which he and his band members (vocalist Myles Kennedy, drummer Brent Fitz and bassist Todd Kerns) discuss the writing and recording of the upcoming album. You can see the first webisode here.

As previously reported, in the UK, the album will be released on 21 May in an exclusive Classic Rock Fan Pack form, providing a unique collectable package containing the studio album with bonus tracks alongside a specially created magazine with unseen behind-the-scenes content put together by Classic Rock.

The Fan Pack format will also come with free gifts including a pin badge and artwork poster and will be available to buy via more than 2,000 retail outlets on newsstands nationally as well as the traditional high street and online music retailers. Roadrunner Records will simultaneously release the record digitally. The standard physical release of the Slash album will follow through Roadrunner Records on 18 June 2012.

In the US, the record will be issued on 22 May via Slash's own label, Dik Hayd International.