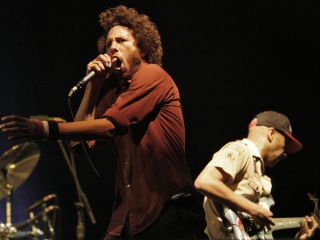 For Rage, victory is sweet. And the gig is free! (Image credit: Mario Anzuoni/Reuters/Corbis)

Rage Against The Machine have just announced that they will play London's Finsbury Park on 6 June for the grand price of...nothing!

As you no doubt recall, the band promised Britain a free gig if their song Killing In the Name made the Christmas Number One slot ahead of The X Factor winner Joe McElderry's version of The Climb.

Guitarist Tom Morello described their victory as "historic" and said the group had "toppled the X Factor giant." Referring to the free show, he added: "Well...here we come. June 6, Finsbury Park, the celebration/party/revolution is ON!!"

Fans need to register for a chance to gain tickets to the event via theragefactor.co.uk. Registration is open now until midnight on Sunday (14 February). A lottery will then be held from 9am on 17 February. The gig is open to all ages but those under 16 must be accompanied by an adult.

Say, how about we stroll down Christmas memory lane and check out Killing In The Name? It goes a little something like this...(oh, but remember, it's NSFW!)