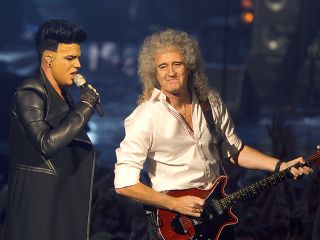 Brian May and Roger Taylor are set to return to the site of Queen's last ever show with Freddie Mercury in 1986 when they headline Sonisphere UK at Knebworth on Saturday 7 July 2012.

Billed as Queen + Adam Lambert, the show will see Taylor and May perform with US singer Adam Lambert, with whom they have previously appeared on American Idol and at the MTV Europe Music Awards.

Although the announcement will undoubtedly polarise the opinions of Queen fans, Brian May is confident that "Adam would meet with Freddie's approval."

Lambert commented: "I'm completely in awe of the Queen phenomenon. The thought of sharing the stage for a full set is so beautifully surreal. I'm honoured to be able to pay my respects to Freddie's memory.

"He's a personal hero of mine and I am deeply grateful for the chance to sing such powerful music for fans of this legendary band. I know the evening will be a huge milestone for me, and with the support of Brian, Roger and the rest of the band I know magic will be on display."

The UK leg of Sonisphere 2012 will also feature Kiss, Faith No More, Marilyn Manson, Refused, Wolfmother, The Darkness, Mastodon and many more