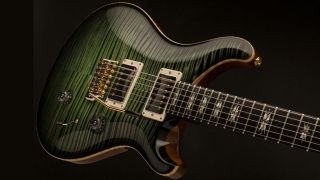 We've seen some outstanding instruments in PRS Private Stock's 2016 Guitar of the Month programme, but October's entry takes it right back to the instrument that started the company in 1985, with a Lotus Knot take on the classic Custom 24.

The model takes its name from the pearl inlays that adorn the ebony fingerboard, while a Sage Glow Smoked Burst-finished curly maple top on African ribbon mahogany continues the theme.

Only 20 of these guitars will be made for October 2016, and we'd wager they won't be cheap…

Take a look at some of PRS's other Guitars of the Month: