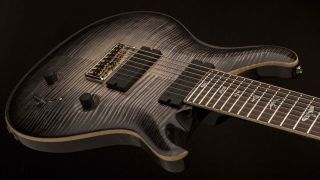 We've seen the odd PRS seven-string, but eight-strings are much rarer birds indeed, unless you're Mark Holcomb, it seems, as the Periphery guitarist has collaborated with PRS on an eight-string version of the Custom 24.

Part of the Private Stock Guitar of the Month program, August's guitar comes tuned to F#, B, E, A, D, G, B, E across a 26.5" scale length and packs Holcomb's signature Seymour Duncan Alpha and Omega pickups, which you'll also find on his excellent SE model.

The rather impressive finish is called Frostbite Glow, and it adorns the curly maple top on swamp ash back, which is paired to a curly maple neck with African blackwood fingerboard and headstock veneer.

It all adds up to perhaps the most stylish eight-string we've yet seen, and suffice to say, we want one.

The snag is that only eight of these guitars will be made, and the price tag is likely to be well into the thousands. Which begs the question: any chance of a production eight-string, PRS?