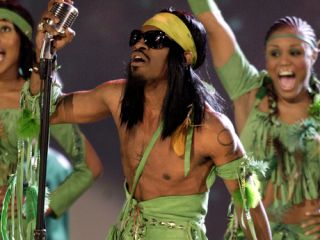 In a role certainly weighted with pressure and expectation, OutKast rapper and sometime thespian Andre 3000 has been cast as the legendary Jimi Hendrix in a biopic titled All Is By My Side, which will begin shooting in Ireland soon.

According to report in ITFN, the film will be set in England during 1966-67, during the period when Hendrix recorded his iconic debut album, Are You Experienced.

John Ridley will direct his own screenplay. His previous credits include penning the scripts for U Turn and Red Tails. He also received story credit for David O. Russell's Three Kings.

Although he's better known for his music, the Grammy-wining Andre Benjamin (aka Andre 3000) has had a few notable turns before the cameras, including performances in the films Semi-Pro, Idlewild and Four Brothers.

"Andre has the musical chops, the artistic sensibility and a devotion to his craft that makes me think he wouldn't take on this iconic role without knowing that he had something deep to offer," said MTV's Gil Kaufman on the rapper's upcoming portrayal of Hendrix. "Plus, as he's proven over and over with his many note-perfect, bulls-eye features on songs since he stopped recording his own albums, when he shoots, he shoots to kill."

So what do you think? Pitch-perfect casting, or is this a role nobody should touch?