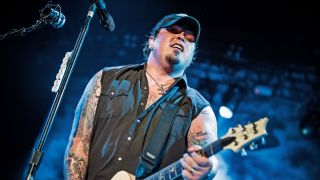 He's Chris Robertson, the lead guitarist for Black Stone Cherry - and he wouldn't go anywhere without his collection of hats...

"It was actually a talent show in high school. We played Free Bird and I attempted the solo - it wasn't all bad considering I was just 15! I think we won because the guys I jammed with were the only actual 'band' who took part. I'm not sure if the judges thought we were the best on offer or they just felt sorry for us."

"It's pretty simple by all accounts: potato chips, sandwich meat, bread, Haribo, hummus, soft drinks, water, vodka and Jim Beam! We don't ask for anything crazy like just green M&M's or whatever. No Van Halen behaviour for us - although didn't they only put that in there to check if promoters were paying attention to the details?"

"I completely love my PRS amps and guitars; they give me the ability to go out every night sounding and playing to the best of my ability. I also have a Cry Baby, MXR La Machine, MXR GT-OD, MXR Phase 90 and a Budda delay."

"For me, it's all about getting the right setup on your guitar and pushing the tubes in the amp. I'm a firm believer that tone is in your hands. You've just gotta get the right tools to allow it to come out."

"Hands down, it would be my hats. A good hat saves any bad hair day, especially if you have to do photos for a magazine or something. My hair isn't quite as lovely as it once was and it now appears to be running away. I'm sure plenty of folks can relate."

Your best tip for getting the audience on your side?

"I would have to say, for me, just being completely honest with everyone in the room. I feel that's always come across with both myself and Black Stone Cherry as a whole. Everything that I say is heartfelt and genuine and I try to get them involved in the show. The UK crowds even love to sing some of our songs for us. I honestly believe that's the entire ticket to our larger shows still feeling intimate. It's all about the band and the crowd working together."

Best venue you've ever played in?

"Man, there have been so many, it's hard to pick just one. I'd have to say the first arena tour we did in the UK in 2014 as headliners is something that I will never ever forget. Being able to play Wembley Arena is always an absolute honour as so many awesome bands have trodden those boards. We'd really love to play the Royal Albert Hall, though - that's on our bucket list and would be amazing. Maybe next time we're back over..."

Worst journey to or from a gig?

"Actually, travelling from Glasgow on this recent tour [in January], the wind was really horrible, battering the side of the bus and it made for a sleepless night. Our amazing driver Frank kept the bus on the road and got us safely to the next show."

"We were opening for Superjoint Ritual a few years back out in the States and as we walked out on stage, we were met with a cry of, 'What's this Lynyrd Skynyrd bullshit?' I mean, in fairness we had replaced Deicide at the show! Such a weird combination of bands, but, bizarrely enough, a good chunk of the crowd actually ended up liking what we did, so at least that one went our way in the end."

"You see a lot of stuff, but at this point, nothing really seems to be that weird or a real surprise. I will say, though, that seeing people with the Black Stone Cherry logo tattooed [on them], or our four signatures in ink is something I don't think I will ever get used to. It's still kind of a crazy thing to see for these four dudes from Kentucky."

"I said the wrong city on stage one night back home in the States. I'm sorry to say it happened. It was pretty embarrassing, but luckily I lived to tell the tale."

"If Southwest was international, it would be great. From what I hear, Virgin Atlantic are good to bands and musicians. It's better now since they brought in the new laws, as they're now not allowed to deny you bringing a guitar onboard as your carry-on item. No more gate checking for me, which is great, because if I've not packed my guitar in a hard case I don't have to worry about damage. I've read some real horror stories online where people's guitars have been destroyed by careless baggage handlers."

"Lynyrd Skynyrd's One More From The Road. In my opinion, it's hands-down the best live album of all time. The songs, the playing, the vibe… for me, it has it all from top to bottom. The line-up of guitar players in that band was the ultimate group of badasses all playing together and making each other's guitar parts come to life. They're a real inspiration."

From sweatbox clubs to sold-out arenas: John Fred Young on the rise and rise of Black Stone Cherry

Round table: Carnival Of Madness