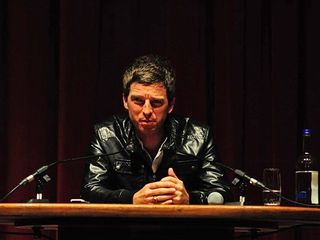 Between fielding the inevitable questions about his relationship with brother Liam ("We had a sweepstake on how long this would take," he joked before explaining that the toys were definitely still outside the pram), phone hacking by the media and some fun riffing on buying a kettle after the conference, an ever-patient, honest and charming Noel Gallagher broke the silence on his forthcoming albums Noel Gallagher's High Flying Birds, released 17 October 2011 and the "far out" completed second 'companion' record which will make itself known next year.

Priding himself on the fact that he'd kept the recording of the album under wraps for so long, Noel explained that a bloke from an English band had tweeted that they'd spotted him in a studio in Los Angeles. Then all hell broke lose.

Early in the conference he was asked about stepping out from his sideman roll: "I've never really seen myself being a frontman and I can see it being a major pain in the arse for me. Even the symbolic thing of standing in the middle of the stage, although I've done it before..."

Assembling the troops for his live shows, kicking off on 27 October in Dublin, appears to have no trouble at all. "The guys just called up and asked to be honest," shrugs Noel. "The keyboard player Mike has played with Oasis on the Be Here Now tour; Jeremy played the drums on the album. He wasn't really doing anything so he offered his services.

"The bass player is Russell Pritchard. He used to be in The Zutons. He was last to come onboard. He asked me if I had a bass player, I said I hadn't so he said, 'I'll do it.'"

Asked if he was apprehensive about recording and releasing a solo album Noel replied, "You don't get nervous making records. You get nervous before gigs. It's different because there's different musicians on it and they're all my songs and I'm singing them. So I don't have to explain to anybody how it went or what it was about or what the delivery should be.

It may still be handbags at dawn but Noel still has friends in Beady Eye and seemed to admit that he will perhaps have to come to terms with that when he begins his tour. "Emotionally, I don't have to deal with that until the first gig. I've been playing with Gem (Archer) and Andy (Bell), I don't know how long it is, but it's over ten years. Even when I've done solo gigs it's with Gem.

"I guess I'm gonna miss Gem the most. We'll just see how it goes. I'm kinda hoping that people will just get the record and I'll be able to pull it off, so to speak."