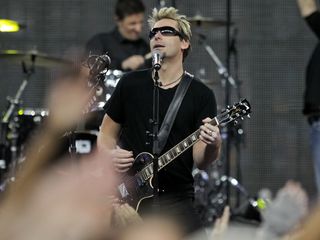 Chart-toppers Nickelback breathe that same rarefied air as bands like Journey and KISS - in that for every fan that adores the group, there's one or two folks, just as passionate, who swear they have no reason to exist, let alone enjoy outrageous success.

And it was this latter portion of the public that made its presence felt in the past few weeks after it was announced that the Canadian rockers would headline a Thanksgiving halftime show during the Detroit Lions' Thanksgiving face-off with their arch rivals, Wisconsin's Green Bay Packers: over 55,000 people signed an online petition demanding that Nickelback be removed from the big event.

In the end, Nickelback played the big show, but as you can see in the above video, their appearance was greeted rather tepidly. Be that as it may, however, the guys in the band have demonstrated that they don't take themselves as seriously as their detractors might think. Check out the above below, in which the band meets with their "label reps" to discuss how they can diffuse the Detroit Lions situation.