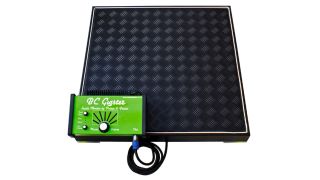 Will the KT Platform send shockwaves through the monitoring industry?

NAMM 2015: How would you like to 'feel' the music you're playing? And we don't mean in an emotional sense - would you literally like to feel it in your bones?

That's what's being promised by Porter & Davies's KT Platform, which is said to deliver 'tactile monitoring' for bass players, DJs, guitarists, stand-up keyboard players and percussionists. It works by providing "a full and faithful transfer of the sound and the weight of the sound through bone conduction". This includes notes and harmonics - not just the rumble of the low end.

It does this using what's being called Kinetic Transfer, and is seen as an alternative to conventional audio monitoring systems.

It's an intriguing concept, with Porter & Davies claiming that the KT Platform provides "that stage shaking excitement that other monitors (in-ears, in particular) don't deliver". It's suggested that you can use it to monitor either just your own instrument or an entire mix.

Suffice to say, this seems like one of those products that you really need to try to fully understand. We hope to find out more at the NAMM Show next week.