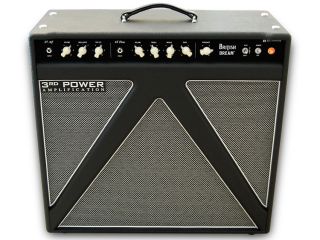 NAMM 2011 PRESS RELEASE: One of the hottest new amp companies in the industry, 3rd Power Amplification, is bringing another Dream model to market at the NAMM Show, January 13-16 in Anaheim.

A sister model to the American Dream introduced to great acclaim in summer 2010, the new British Dream uses the same tubes found in the originals, but combines them with designer Jamie Scott's innovative circuit design and cabinet structure to create a thoroughly modern combo amp that provides classic tube tone without compromise.

The British Dream is a hand-wired, two-channel tube combo guitar amp featuring an Invasion ('59 AC) Channel and a '68 Plexi Channel, with a special design 12-inch speaker housed within 3rd Power's unique triangular inner chamber. A removable triangular Switchback port on the back panel gives the user a choice of open- or closed-back operation.

The power section features the same tube types used in the original amps, with EL34 power tubes, known for their rich harmonics and forward mid-range sound, switchable between 45 and 20 watts operation.

The '59 AC Channel uses an original EF86 pentode and features Tone and Top Cut controls. The Plexi Channel has classic Bass, Middle and Treble controls, and is powered by two 12AX7 triodes. A third 12AX7 tube is included in the amp's phase inverter circuit. A global Presence knob rounds out the tone controls.

3rd Power also offers the Celestion Alnico Gold speaker as an optional upgrade, and will also offer the British Dream as a standalone head amp.

"The British Dream offers the iconic tones of two classic tube amps," explains 3rd Power founder and amp designer Jamie Scott. "The 1959 AC30 is the rarest of Vox amps, while the Marshall Plexi is the amp made famous by artists like Pete Townshend and Jimi Hendrix."

"Since they both use the same output tubes, we were able to create a design that recreates both iconic tone palettes in a single amp, at the same time putting the 3rd Power spin on it with enhanced touch-sensitivity and harmonic structure. Like the American Dream we introduced last summer, we expect the British Dream to find a home both with musicians on tour and engineer/producers in the studio."

In his approach, Scott uses modern circuitry design to ensure reliable, trouble-free operation, such as eliminating the microphonic qualities of the EF86 tube through judicious placement on the circuit board and isolating the speaker by housing it within a triangular internal chamber. This radical approach has the added advantage of eliminating the standing waves that are inherent byproducts of traditional rectangular cabinet designs, allowing the true tonality of the amplifier to come through loud and clear.

"As a guitarist and designer, most of my adult life has revolved around the quest for tone," says Jamie Scott, "and 3rd Power Amplification is the result. We are committed to helping guitarists create extraordinary tone that conjures an emotional experience. The Dream Series amps are great examples, using original vacuum tubes and modern design to recreate authentic vintage tonality both on stage and in the studio."

The British Dream combo guitar amp is made in the USA and carries an introductory street price of $2699.