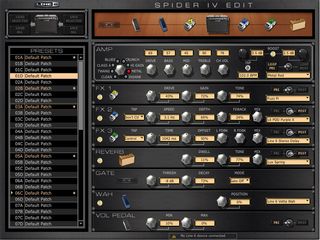 Get more effects for your Spider guitar amp

"Spider amplifiers are famous for their unparalleled flexibility," said Aaron Suplizio, Amplifier Category Manager at Line 6. "These free updates, which deliver additional effects and expanded flexibility, are the icing on the cake."

Spider FX Infusion delivers 28 additional effects to Spider IV and Spider Valve MkII amplifiers. The free update more than doubles the amount of overdrives, compressors, delays, reverbs, mods, and wahs included each amplifier, and boosts the total to more than 50 effects: a number that tops the amount offered by any other modeling amplifier.

A Line 6 FBV™ MkII foot controller is required to download and use Spider IV Edit, Spider Valve MkII Edit, and Spider FX Infusion software. All software is available as a download from www.line6.com/software Spider IV 15 and 30 are not compatible with the updates.