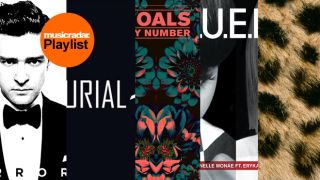 We've already run through a few of our favourite LPs of the past twelve months, now here, in this final Playlist of 2013, the individual members of MusicRadar's editorial staff pick a few of their personal favourite tracks of the year.

Taken from Monae's sprawling concept album The Electric Lady, Q.U.E.E.N.'s taut funk calls to mind early-'80s Prince. That is until the string-laden breakdown, which has echoes of What's Going On.

If that sounds like a heady brew on paper then just wait until you listen to it. It's got a cracking video, too, and Erykah Badu's nonchalant cameo is the icing on the cake. (Ben Rogerson)

Burial - Come Down To Us

A late contender for track of the year for me, from Burial's - now seemingly traditional - surprise pre-Christmas EP release. The whole Rival Dealer EP is a sprawling, prog rock-like tale of gender issues and questions about identity, told via the medium of deconstructed UK garage. Come Down To Us is the visionary thirteen-minute grand finale; an emotionally charged blend of atmospheric samples, sluggish drum machine beats and gorgeous new wave pop synths. (Si Truss)

It's Foals! It's pop! It's baby-horse jive and it was all over my internal jukebox for a sizable chunk of the year. Yannis is a tiny, funky hero and long may Foals continue being brilliant. (Rob Power)

Says - from German composer and producer Nils Frahm's semi-improvisational live album Spaces - is quite simply the most gorgeous and evocative piece of synthesiser-led music anyone has released all year. (ST)

Peace make me remember what it was like to be 15 and consumed by guitar pop. Wraith is full of the sort of cultural references that make me feel old, but catchy enough to ensure I don't care. I'm reasonably sure that this band will go on to do great things, primarily because they seem to understand the value of a decent chorus. (RP)