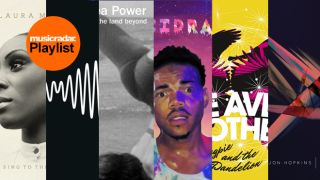 We're far too much of an eclectic bunch here at MusicRadar to even consider putting together a proper 'albums of the year' list.

It's near enough impossible to find a single artist that the guitarists, DJs, producers and drummers that make up our editorial staff can agree on [Prince, perhaps?] let alone a full list of albums. Instead, below, we've asked the various members of team MusicRadar to nominate an album or two that has struck a chord with them personally.

Let us know your own albums of 2013 in the comment section below.

British Sea Power - From the Land to the Sea Beyond

Emphatically not designed to get your beach party started, From the Land to the Sea Beyond is instead an elegiac hymn to Britain's relationship with the sea. British Sea Power's 6th full-length release soundtracks Penny Woolcock's contemplative documentary montage of the same name and while it's best enjoyed alongside the movie's evocative archive footage, it absolutely stands up on its own merits.

Occasionally epic without becoming grandiose or overbearing, and largely melancholic without tipping into out-and-out gloom, it's a perfectly judged paean to an island nation's past and, unlike the sea it eulogises, surprisingly warm in parts. And yes, there are some seagulls. (Will Groves)

2013 was the year of the Monkey in the Power household, and AM was the reason for that. Towering over any other guitar-oriented release this year, it was the catalyst that turned the Arctic Monkeys into a continent-straddling colossus of a band. I fully expect Alex Turner's hips to be solving global crises any day now. (Rob Power)

Kanye's excellent Yeezus has, fairly understandably, been the hip-hop record that's ended up getting the most love across the morass of end of year lists to hit the internet in recent weeks. For all its edgy production and opinion-dividing lyricism, however, Yeezus is far from the be all and end all of hip-hop in 2013.

A fellow Chicago native, 20 year old Chance The Rapper has to be the genre's breakout star of 2013. His free mixtape, Acid Rap, released back in April, is an impressively assured and polished work for a new artist. In terms of both its production style and its lyrical content it seamlessly blends old school-style nostalgia with unmistakable youthful energy and optimism. It's a definite feel good record, but hugely creative at the same time - certainly my personal album of the summer. You can still download Acid Rap for free. (Si Truss)

Laura Mvula - Sing To The Moon

In 2013, it wasn't easy to create an album that sounded like no one else, but Laura Mvula managed it. Don't make the mistake of categorising her alongside Adele and Emeli Sandé: this Birmingham-based singer/songwriter's debut displays too much inventiveness and eccentricity for that comparison to stick, but the 'quirkiness' (if that's what you want to call it) never feels forced.

Initially composed on a laptop using GarageBand, Sing To The Moon is full of ingenious harmonic progressions, gorgeous layered vocals and - above all - beautifully-crafted songs. (Ben Rogerson)

The Avett Brothers - Magpie And The Dandelion

Magpie And The Dandelion, the Avetts' third collaboration with producer Rick Rubin (it was recorded during the same sessions that yielded 2011's The Carpenter), is a potent exercise in soul mining that quickly buries itself into the thicket of your senses and grows in depth and meaning with each listen.

At this point, the Avett Brothers musical palette - one that mixes bluegrass, alt country, progressive folk and indie rock - is so rich and varied that it defies classification, and their limitless musical vision is matched on Magpie by lyrics that play like literature and evoke an astonishing sense of wonder. (Joe Bosso)

The brilliance of Immunity lies in its seamless amalgamation of pumping dancefloor-friendly rhythms and warm, humanised atmospherics. It's a techno album that's broken free of the genre's mechanised roots and instead feels like a living, breathing organism. (ST)

Tales From Terra Firma, Stornoway's self-produced second album, confirmed what I'd always secretly suspected: this band will save my soul. Brian Briggs' voice is reason enough to love this band, but the wide-eyed wonder in the lyrics and the soaring melodies genuinely make me feel like there's hope for us all. There probably isn't, but at least we can all listen to this record and pretend. (RP)