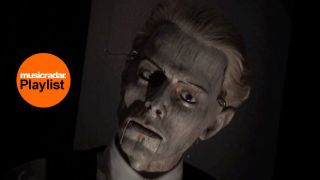 It's Friday, which means it's time for another edition of MusicRadar's ever-eclectic selection of new tracks and office favourites.

A confusing slow burn here at MusicRadar towers, Darkside's recent album Psychic could so easily have been plain wrong. Slo-mo electronic dance noodlers like Nicolas Jaar don't typically get involved with blues jazz guitarists, but his collaboration with Dave Harrington is a triumph. Paper Trails - definitely at the JJ Cale end of things - is a pretty good gateway to more epic, sprawling tracks like Golden Arrow and Metatron. (Will Groves)

British electronic duo Mount Kimbie have a new remix EP out this week, which sees the likes of Oneman, Lee Gamble and Kyle Hall reworking tracks from the band's excellent second album Cold Spring Fault Less Youth. This elongated and brilliantly smooth reworking courtesy of the ever-reliable DJ Koze is the pick of the bunch, however. (Si Truss)

Understandably, everyone's listening to 'Perfect Day' this week - and what a moving tribute it is. One of my favourite Lou Reed songs, however, is a cover he recorded for the Lost Highway soundtrack.

Riding a burning undercurrent of guitar feedback, Lou brings out the bittersweetness in this tune - which was originally written for Ben E King in 1960.

I was lucky enough to interview Lou in 2011 and he was a charming swine, as confrontational as you'd expect but also bracingly honest. What a shame he's gone. (Ric Rawlins)

He might not have turned up to the Mercury Prize ceremony this week, but David Bowie did contribute this Halloween-friendly video to proceedings, which he made to accompany James Murphy's remix of his track Love Is Lost. Supposedly, Bowie made this video himself on a budget of just $12.99, and needless to say it's way better than anything we could ever do for $12.99. (ST)

Cate Le Bon - Are You With Me Now?

Cate Le Bon is a mysterious pop songwriter from Wales, and she always blends alluring, misty melodies with a nicely retro, vinyl-style sheen to the production. It's the kind of music you could imagine Andy Votel digging up in the attic of some old Celtic fisherman from 1972. Or something. (RR)