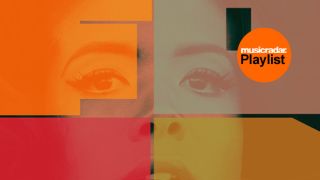 With NAMM over and done with, the MusicRadar team have this week been allowed to stop obsessively fixating on new gear and actually listen to some music. Here are the latest clutch of tracks to make it on to our office stereo. Enjoy.

It's never been so hard to predict the future of Guided By Voices: One minute, Robert Pollard is saying that the reunited band will release three albums a year (that hasn't happened); the next, he's hinting that they're on their final record. Littlest League Possible, from the forthcoming Motivational Jumpsuit LP, is all things great about GBV in one typically tight package: a chugging riff/rhythm, dirty garage-pop production and a wondrously sweet melody that is over practically as soon as it begins. Word is, another record is already in the can, so we just might get that trio of releases this year after all. (Joe Bosso)

Kelis has a new album out on Ninja Tune in April and this week, as a precursor, the label has unveiled two excellent remixes of last year's fantastic Dave Sitek produced freebie Jerk Ribs. Earlier this week, UK duo Mount Kimbie unveiled their brilliantly low-key reworking of the track, which can be streamed over on SoundCloud. Today Manchester-based producer Ben Pearce has followed it with his own deep, Friday night-friendly take on the track, which you can hear above. We're fans of both, although in all honesty we still prefer the retro, horn-drenched original. (Si Truss)

All My Loving - The Beatles

It's Beatles week on MusicRadar (check out all our Beatles goodness here) and even after a week of almost non-stop Beatles listening, All My Loving still knocks me out. How on God's green earth is Macca playing that bassline and singing at the same time? John's tight-as-you-like rhythm part is relentless, George's solo impeccable and Ringo is just there. No wonder America lost its mind. (Rob Power)

Broods - Taking You There

Like Lorde, brother and sister duo Broods hail from Auckland and are produced by Joel Little. It would be unrealistic to claim that that's where the similarities end, but Broods have their own take on what dreamy and - yes - brooding pop should sound like, with Taking You There, which comes from the recent Broods EP, also having hints of The xx. (Ben Rogerson)