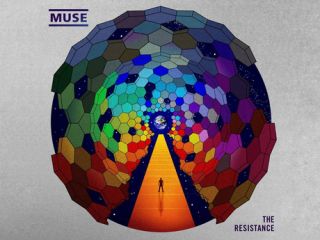 On The Resistance, Muse's fifth album, the band go big. A shocker, right? Not really. Since they first appeared as vague Radioheaders with 1999's Showbiz, it was evident that grand schemes and notions of musical grandeur danced in the band's collective head.

Now those dreams are made manifest: Muse have grown up, grown into their ambitions, and they create the sort of bombast that makes 'bombast' a much less ugly word.

Early into the recording, maverick guitarist and musical renegade Matthew Bellamy hinted that The Resistance would be "orchestral" and "classical," sending shivers down many a spine. Would Muse lapse into a cringe-inducing, ego-inflated ELP/Rick Wakeman prog odyssey?

The good news is, not hardly. Sure, Muse want to impress us, but more than that, and more significantly, they want us to feel. And because that impulse is so genuine - driven most urgently by frontman Bellamy, who writes the bulk of the material - we do feel. In this day and age, that's saying something.

Bellamy has all of his influences lined up like ducks in a row here. There's Berlioz and Lizst, and a whiff of Rachmaninoff for good measure. Chopin he virtually name-checks, having included a passage from Nocturne In E-Flat Major in the unabashed Queen tribute United States Of Eurasia. The same goes for opera - I Belong To You features parts from Samson And Delilah.

But we also detect some Debussy and Gershwin (intentional?), along with an overall framework that recalls the epic theatre of Bertolt Brecht and Kurt Weill.

OK, you're scared, right? Don't be. On first listen, The Resistance is a masterwork that offers plenty of aural thrills. Bellamy's Manson guitars are locked on 'stun' throughout, although we do have a quibble, and it's a major one: He's a bit of a tease.

That's the problem when you want to cram so much music into each song - something's gotta give. Bellamy's a modern-day rock god shred king, right up there with the best of them. On The Resistance, when he should let us bathe and luxuriate in his six-string triumphs, he gives us brief, refreshing showers.

Next page: The Resistance track-by-track

A gritty, stomping Glitter Band-update, full of symphonic keyboard lines and lively handclaps. Bellamy sings in a much lower register than in the past, removing all traces of Jeff Buckley and Thom Yorke from his vocals. "They will stop degrading us," he insists. "They cannot control us/We will be victorious." And as he tears into a full-throttle, grungy guitar solo, we believe him.

After a delicate keyboard pattern underpinned by an insistent floor tom beat, a snare crack snaps and we're rocking with Bellamy's relatively unprocessed guitar. The chorus is a high-gear mover in which Bellamy sings, "Love is our resistance/They'll pull us apart and they won't stop breaking us down." Shades of George Orwell's 1984 continue to inform his lyrics; he seems fascinated by passion surviving nefarious forces. Filling us with hope and breaking our hearts in the space of one song is quite a feat.

The guitar isn't front-and-center on this hard-edged, '80s-sounding number that recalls Depeche Mode during their Music For The Masses period. Multi-tracked chorus vocals ring out "I want to reconcile the violence in your heart/I want to recognize your beauty's not a mask." It's the album's weakest cut so far, but things pick up in short order.

A moving, piano-based opening quickly turns on a dime and we're plunged into Queen territory. Thunderous drums and a pseudo-Middle Eastern synth melody surge through the verses. With this number, there can be no doubt that Bellamy has developed into a world-class vocalist - he opens both his throat and his soul. The mid section is a mix of Broadway-meets-Bohemian Rhapsody panache and the end quotes Chopin - performed by Bellamy himself. In a word, gorgeous.

Walloping bass and drums mimic a heartbeat of this pumping love song and Bellamy wails on the top strings of his guitar. "You are my guiding light!" he bellows with the utmost sincerity. But the centerpiece of this rocker is actually at the end, where the guitarist unleashes a heavily processed metal shred corker that recalls Brian May at his finest. The solo is over far too early - but hey, it was great while it lasted.

Next page: A symphony awaits

An organ straight out of Phantom Of The Opera has us thinking one thing, and then a doozy of a guitar riff - I mean, one heck of a riff! - has us thinking something else altogether. Bellamy's pulling out all the stops here, and after a dramatic middle eight in which things slow down, we're at full-tilt rock again. But wait... it changes. Now the mood is dreamy, and Bellamy digs into a bottom-string solo that overwhelms - and it's over before you know it. But he lays into his axe again at the end, this time on the top strings. His guitar weeps, wails and screams.

A guitar lover's paradise. Fuzzed-out lines introduce a frenzied rocker. Bellamy's staccato, hugely distorted parts pummel this song into submission. Before you think he can do no more, the guitarist takes us by the hand and leads us into the Hall of the Riff Kings. Transcribers of the world, take note.

Probably the closest that Muse has ever come to R&B, it begins with a deep piano groove, yet the vocal melody has no discernable hook. The number seques into a Brecht-Weillian interlude that explodes into Queen-esque opera. This is the soundtrack for a movie not yet made, full of yearning and passion. Bellamy demands that you hurt, that you experience his ache. During one section he sings in French, and even if you can't speak the language, it doesn't matter - you can't help but share in his emotions.

Sweeping keyboards yield to a wall of David Gilmour-like guitar soloing, a monster work of echo that soon fades into...

The calm after the storm. A lilting piano melody is soon accompanied by soothing bass and drums that are then overtaken by a fog of musical soundscapes. Enormously thrilling, rousing... and it all ends rather peacefully. Once it's over, you feel as though you've just awoken from a dream... and one you can't wait to return to.