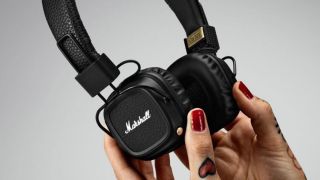 Marshall has been in the headphones game for over five years now, but having recently joined the smartphone market, it's about time it waded into wireless waters, and the Major II Bluetooth does just that.

When using the wireless connection to listen to music, the Major II's 3.5mm out can be used to share audio with another set of headphones (nifty), while a control knob - modelled on Marshall's amp controls, natch - offers wireless control over phone and remote features, including music playback; a remote cable is also included.