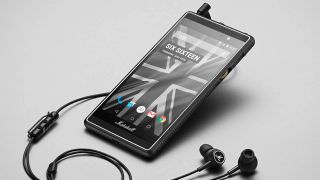 As you might expect, Marshall has designed the phone for music fans, utilising a Wolfson soundcard for high-res audio, plus two stereo jacks and a pair of front-facing speakers, which, it claims, might just make it the loudest phone on earth.

It also boasts dual microphones for laying down song ideas, with built-in noise reduction, as well as a low-latency audio input for use with Android music-making apps.

The London runs on Android Lollipop, and features a 4.7-inch 720p IPS panel and a Snapdragon 410 SoC processor, and comes coated with Marshall's trademark leatherette around the sides and rear.

With the likes of Gibson dipping its toes into the headphone waters and lifestyle amps from Yamaha and Blackstar finding themselves in countless guitarists' living rooms, perhaps we shouldn't be so surprised to see the launch of a phone - after all, Marshall has been in the headphone game some time, and lest we forget, the company once released a fridge.

The question remains, however: what does this mean for guitar companies? Are you more likely to buy a Marshall phone as a guitarist than a non-musician consumer, and if so, can we expect other manufacturers to diversify into lifestyle tech?

Let us know what you think below - perhaps in a few years time, we could be filling this site's reviews section with hands-on assessments of Fender microwaves, Orange fitness trackers and ESP TVs…

The Marshall London will be available later this summer for $499 (£399). Head over to Marshall Amps for more.