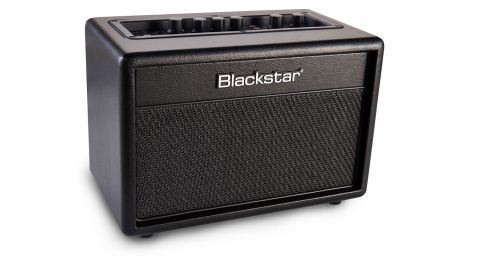 While the original ID:Core line provided the blueprint, we reckon Blackstar's nailed the desktop amp formula with the BEAM.

Back in the 50s, cash- and amp-strapped guitarists plugged into their radios to save investing in the combos of the day. Now, we've come full circle, and we're happy to play through amps that double as music playback systems, which not only give more bang for your buck, but also save space in your living room. Blackstar's BEAM represents one of the most evolved forms yet, introducing Bluetooth streaming alongside its wealth of models and rugged good lucks.

It doesn't stop there, though: the BEAM is also Blackstar's first product for acoustic and bass players, with two acoustic preamps, a pair of bass voices and two acoustic sims for your electric, too.

That's in addition to the modulation, delay and reverb effects from the ID:Core line, as well as a few surprises along the way. As anyone who's used the Fly 3 will attest, you can trust Blackstar to deliver big tones from small packages, and the BEAM pushes some serious air from its pair of three-inch full-range speakers and ported construction.

It also utilises Blackstar's Super Wide Stereo tech, which delivers a sound that feels as if it's coming from all around the amp, rather than just the direction of the speakers. That makes playing music via Bluetooth a killer experience, too, and the BEAM's sound quality is comparable to similarly priced portable speakers.

ID:Core fans already know what to expect from the amp side, starting with two flavours of sweet, rich cleans and varying levels of dynamically responsive crunch.

Upping the ante with the OD 1 and 2 channels delivers fat, chunky gain sounds, with plenty of saturation for legato leads. That said, you might find your sustain cut short by the slightly over-active noise gates of these voices, but that's fixed easily by hooking the BEAM up to your computer and deep-editing using Blackstar's free Insider software.

And while the ISF control is great for fine-tuning, we found that some voices did get a little bass-heavy when you hit fully clockwise - a standalone tone control wouldn't have gone amiss here.

However, click the voice knob down and you're granted access to an all-new bank of tones. Electric players get two acoustic simulations (one for single coils, one for humbuckers). As with most sims, neither will set the world alight, but they're perfectly viable for a recording mix.

More intriguing are the two acoustic patches (one flat for active EQ'd electro-acoustics and one hi-fi, record-ready preamp) and bass sounds (classic and modern).

Acoustic 2, in particular, really makes an electro sizzle, especially with a dab of reverb, and there's enough volume here to power small cafe gigs. Even the bass voicings impress, with plenty of oomph for practice and recording.

What really makes the BEAM sing is its range of delays and reverbs - there are four kinds of analogue-voiced delay and four sizes of room, up to a colossal plate, and thanks to Super Wide Stereo, it's as if they're ringing out around you, enveloping you in the sound.

The modulations - phaser, flanger, chorus and tremolo - are all pedal-worthy, as well, rather than just tacked on to bulk out the features list. What's more, buried away on the bass voices, you'll find a funky envelope filter, plus a gnarly gated fuzz, both of which sound great on guitar. You can save your favourite sounds to any of the amp's 12 onboard patches, too.

The BEAM's dimensions make it ideal as a desktop amp, and although it's bulkier than your average portable speaker, it does a damn fine job of Bluetooth streaming, and makes playing along to your tunes a totally immersive experience.

Sure, it doesn't have unlimited modelling options or an iPad app, but the BEAM's strengths lie in its simplicity, which encourages you to play and listen more at home - and that's a design philosophy few of us could argue with.