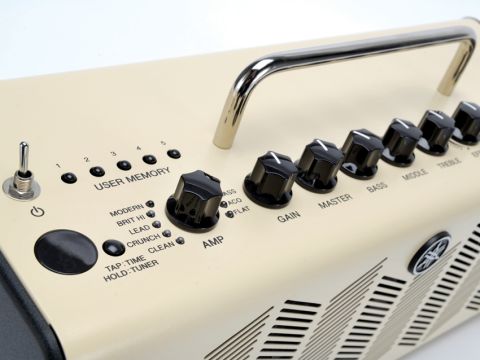 Yamaha has reinvented the practice amp to dovetail neatly with the demands of the average guitarist's modern life. The perfect solution for playing and jamming at home.

Despite making more musical instruments than any other brand on earth, Yamaha isn't exactly the first name you'd associate with electric guitar amplification.

Although the solid-state GA-15 practice amp is still a fixture of the catalogue, the DG series modelling amplifiers have long since been discontinued, and you'd have to go back to the valve-powered T50 and T100 designed by Mike Soldano in the late 1980s to find a Yamaha amp capable of getting pulses racing. However, that could all be set to change thanks to Yamaha's newest foray into the world of guitar amps - the THR.

The THR theory is sound: most serious guitarists have a big amp that does the business at band levels, but is way too loud for home use. Many will also have a smaller combo for rehearsals and intimate gigs.

But even a low-wattage valve amp with built-in attenuation can be too loud in a domestic context, and will the other half let you keep an ugly practice amp in the lounge? Forget about it.

A THR? Well, it might just fill the gap. And then some.

Unboxing the units, we're struck by the smart retro cosmetics that bring to mind in equal parts a lunchbox amp head and a high-end DAB radio. Both models have a pair of full-range eight centimetre stereo speakers onboard so, unlike a mini valve head, you don't need an additional cabinet.

Neither THR model would look out of place on a shelf or desktop and they are certainly more discreet than a 1 x 12 combo, or a home audio system for that matter. Only the textured plastic section of the casing cheapens the appearance a little - some sort of wood veneer would be
a classier alternative.

That said, these aren't strictly living room amps; eight AA batteries enable you to hone your skills or jam along with your iPod in remote locations thanks to the 1/8-inch aux input. It's perfect for an impromptu Gobi Desert blues jam session, or more realistically, for blasting out the soundtrack to a summer camping trip.

You might assume that the chief difference between the THR5 and THR10 is one of output wattage, but in fact both units are rated at 10-watts (five either side) and house identical speakers - the model names don't denote output power.

The larger THR10 benefits from the versatility of three additional core sounds (bass, acoustic and flat), five memory locations for storing sounds, a three-band EQ as opposed to a tone pot and separate output controls for guitar and USB/aux.

Under the hood, both THR units use Yamaha's new Virtual Circuit Modelling (VCM) technology for core sound generation, with the control response designed to mimic the 'real thing' - valve amps. In this instance, the five amp models offer a range of Fender, Vox, Marshall and Boogie-style benchmark sounds that should be familiar to anyone who has used any amp modelling hardware of the last decade.

This simplicity, along with a selection of modulation and ambience effects derived from stompbox modelling and Yamaha's pro audio mixing desks, but controlled by standard rotary pots, ensures that you won't have to waste valuable practice time navigating your way through menus.

However, if it's deep editing that you want then Yamaha's THR Editor software allows you get to grips with amp and effect parameters with the units hooked up to a computer via USB. In addition, this enables you to control hidden compression and noise gate functionality, so the THR is a product that's as simple or as complicated as you want it to be.

The amps' USB 2.0 connections also facilitate using each unit as an audio interface and stereo monitor in combination with computer recording software such as the bundled Cubase AI. Or you could just use it as a great speaker system when watching a film on your iPad; don't underestimate how much this will improve your enjoyment!

Access to both dry and wet stereo signals over USB enables you to plug in and demo ideas quickly using the core THR sounds then potentially re-amp the dry DI signal at a later date. This is a real plus, as not only has re-amping guitars become commonplace in recent years (even if the artists themselves aren't aware!), but it also means that you needn't waste precious studio time trying to recapture the vibe of a part that you nailed on a home demo.

Fired up, both amps emit a warm orange glow from behind their powder-coated metal speaker grilles that might trick the uninitiated into thinking that valves are housed inside. Yamaha calls this 'Virtual Tube Illumination', which is presumably tongue-in-cheek, but we do like a good light show nonetheless and it's certainly more appealing than a backlit monochrome LCD display.

Plugging in and kicking things off at the cleaner end of the spectrum with a little simulated spring reverb thrown in for good measure, it's immediately evident that even the physically smaller THR5 has a much bigger sound than you'd expect from a box of its diminutive size. Hugely so, in fact.

With its master and volume controls pushed hard, there's remarkable bottom end on tap that retains definition even with a high output neck humbucker, while the higher frequencies really sing.

As you switch settings further up the gain scale, proceedings inevitably get a little rougher around the edges with more pronounced mids, but in a good way. With a generous helping of dirt, single-coil hum can be hard to control without judicious gating via the THR Editor software, but that's certainly preferable to having to fork out for a stompbox noise suppressor.

Crucially, these amps have been designed to sound good and retain dynamics without sounding overly processed, whatever the volume level, and Yamaha has certainly achieved that. It's refreshing to play through an amp that doesn't sound worse when you turn it down.

The company's Extended Stereo Technology makes for a spacious, three-dimensional experience that really doesn't feel like any other practice amplifier we've encountered, particularly when the stereo reverb is engaged.

To our ears, the clean, crunch and modern voices are where the best sounds sit, as the Marshall-style Lead and Brit Hi modes are a little grainy. But it's subjective, and can be fine-tuned with the Editor software.

Although the official spec states that both models have the same output power rating and speaker size, the THR10 is very much the bigger brother. Yamaha says that the large enclosure and the addition of a high-quality three-band EQ are the main factors that make the THR10 punch harder than its sibling, and the piano-like bass from the clean channel is something to behold.

Although it is designed for domestic use, so output power is something of a moot point, the larger THR would cope admirably with live performance in intimate coffee house-style surroundings alongside a polite drummer.

The Bass and Flat modes offer yet more flexibility. Whether it's four-string fun or even plugging in a keyboard, the results are very impressive.

By comparison, the THR10's electro-acoustic mode feels a little underpowered to our ears, but Yamaha assures us that this is merely an issue with our prototype review model, and that the production version will have updated firmware in order to even things out.

Make no mistake, whichever THR unit you choose, both of these amps will make you play the guitar more. They're also likely to consign your existing iPod dock and laptop speakers to the attic or eBay, as the spacious, hi-fi reproduction via USB or the stereo auxiliary input is good enough to put some dedicated speaker systems to shame.

As far as we are concerned, the important question isn't whether or not you need a THR in your life, it's which model suits you best. While we were smitten initially by the more compact simplicity of the THR5, using the units in a variety of real-world scenarios saw the additional features and bigger sound of the THR10 come in handy time and time again, making it perhaps the smarter investment in the longer term.

The perfect third amp? The THRs are a whole lot more than that…